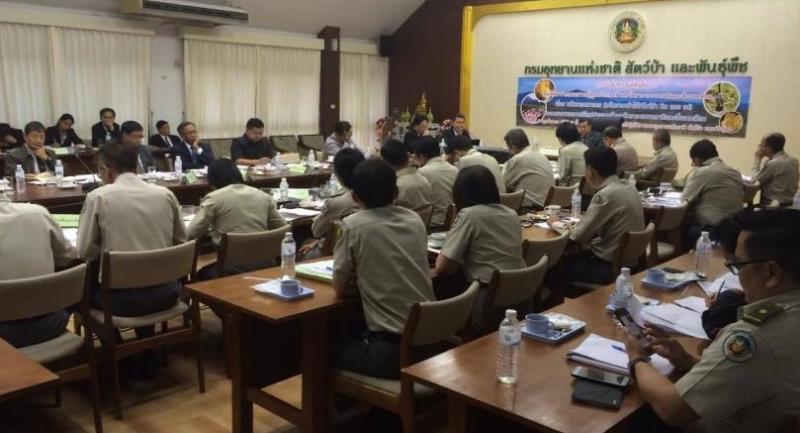 The reform panel at the DNP.

AS A former member of the National Reform Steering Assembly working to turn the reform blueprint by its predecessor, the National Reform Council, into action, Assistant Professor Khwanchai Duangsathaporn well realises that reform needs to materialise and to be seen as a tangible success.

He and his colleagues at the National Resources and Environment Committee have not missed the opportunity to ensure a tangible reform plan for one of the most complicated sectors: forests.

The committee’s working panel on land resources has completed its reform plan for the forest sector to be proposed to the public and the government by next month. Over a week ago, it met with forest chiefs to present the scope of the reform plan, which has addressed the most critical challenges in the sector, including massive encroachment that has caused conflict for years.

Khwanchai said that, along with deforestation, encroachment had long been a chronic problem. The trend of deforestation has slowed down, from an average 800,000 rai (128,00 hectares) a year over the last 40 years to 30,000 rai a year in the past few years, partly due to stringent law enforcement under the junta’s directives. However, Thailand has still lost a massive amount of forest, with only around 102 million rai remaining. Worse, about 20 million rai, mostly in watersheds, is severely deforested and almost 6 million rai has been occupied.

Khwanchai said the severity of the problem pointed to flaws in forest managemeny.

“The problem is deep-rooted, and our agencies in charge of forest protection cannot keep up with it,” he said.

Khwanchai said that under the major administrative reform that took place in 2002, forest agencies, including the Royal Forestry Department and the National Parks, Wildlife and Plant Conservation Department, were reorganised and separated. However, this bureaucratic rearrangement was apparently done to manage the workforce, not respond to the challenges and problems at hand.

The new reform panel has recognised this weakness, and thus highlighted the reorganisation of forest-related organisations and reforming their laws as one of the five key issues in the forest sector.

Under the reform plan, current organisations would be subject to reviews and reorganised again to respond to the current challenges. Their regional offices would be reformed to respond to area-based missions, while their law-enforcement units would be empowered to suppress forest crimes.

More importantly, forest-related laws would be amended to pave the way for better forest management and protection. Among those would be the National Parks Act and the Wildlife Conservation Act.

Khwanchai said that the NRSA had proposed such legal amendments but could not finish them during its term. What would be different, he said, would be the introduction of regulations under these laws that would help ensure reform tangibility.

For years, the relevant agencies have had to deal with people living in the forest or claiming ownership of forest land. The forest reform panel estimates that as many as 5.9 million rai are encroached upon at present. In 1998, the Cabinet decided to issue a resolution to pave the way for a massive land-ownership verification process for forest dwellers nationwide. However, the task has never been completed and a number of plots subject to verification have since changed hands, further complicating the issue.

Khwanchai said this problem must be finished so that forest territories and boundaries could be clarified and defined and massive encroachment could be tackled at its root. All related Cabinet resolutions or regulations would be subject to review, and new tools to help tackle this problem would be developed and put in place.

Khwanchai said the panel views that work on the ground should have continuity, and that responsible agencies must be identified and followed up to ensure that forests are well protected. Authorities would be alerted about further encroachment in a timely manner and these problems would be resolved. This could prevent problems accumulating as they had in the past, he said.

The forest reform panel has proposed public participation and resolutions for human and wildlife conflict as the fourth and fifth reform issues.

Khwanchai said to resolve the problem in a sustainable manner, the people’s participation is the most critical issue. With support from the people, forest protection would be assured in the long term.

Thanya Netithammakul, chief of the National Parks Department, said overall the panel’s reform plan had responded well to the challenges that the forest agencies face – especially conflicts involving people living in the forest.

As the department head, he hoped that reorganising the agency’s authority and law reform would particularly help address this problem.