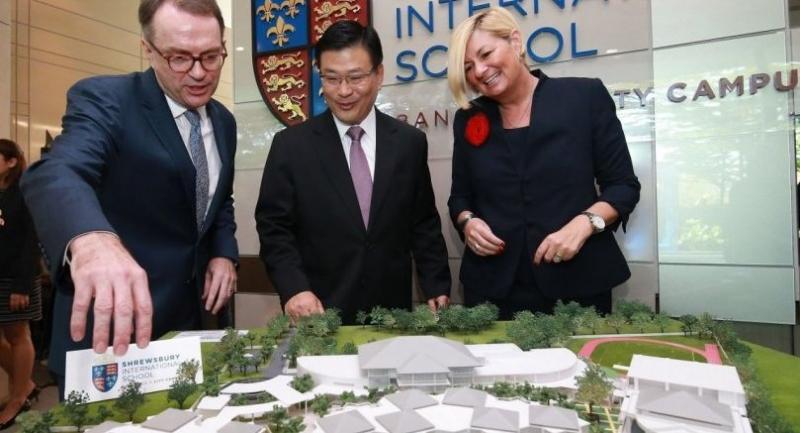 The facility will have the capacity to accommodate 640 pupils aged 3 to 11 years. Sitting on a 15-rai (2.4-hectare) plot of land between Sukhumvit Road and Rama IX Road, it will open next August.

“We aim to build Thailand’s best primary school at the new site. It is being purpose-built for young children and raises the bar in primary school education in Thailand,” said Chali Sophonpanich, founder of Shrewsbury International School Bangkok. “A modern, technologically advanced learning environment, security and plenty of natural greenery are all designed into the school from inception.”

The city campus will complement Shrewsbury International School Bangkok’s riverside campus on Charoenkrung Road. The riverside campus, which was established in 2003 with the support of Britain’s highly respected Shrewsbury School, comprises a primary and secondary school for children aged 3 to 18 years with almost 1,700 pupils enrolled.

It is regularly ranked among the best schools in the region. At the helm will be Stephen Holroyd, director of schools for Shrewsbury International in Asia and an educationalist with 12 years’ experience in Thailand as principal of Shrewsbury’s riverside campus.

“Shrewsbury Bangkok’s riverside campus, which offers both primary and secondary education, is attracting a lot of very talented children because of its proven ability to develop well-rounded graduates who are academically and professionally successful and are inculcated with the best human values,” he said. He said the school has been compelled to turn away more than 650 well-qualified children who were applying for a place in the Junior School at the riverside campus due to the space limitations over the past three years.

“The Shrewsbury International School Bangkok – City Campus will help us provide those extra places for deserving children while at the same time giving us an opportunity to build a campus that is specifically designed for children aged 3 to 11 years,” he said.

Children completing their primary school education at the city campus are guaranteed a place at the secondary school in Shrewsbury Bangkok’s riverside campus.