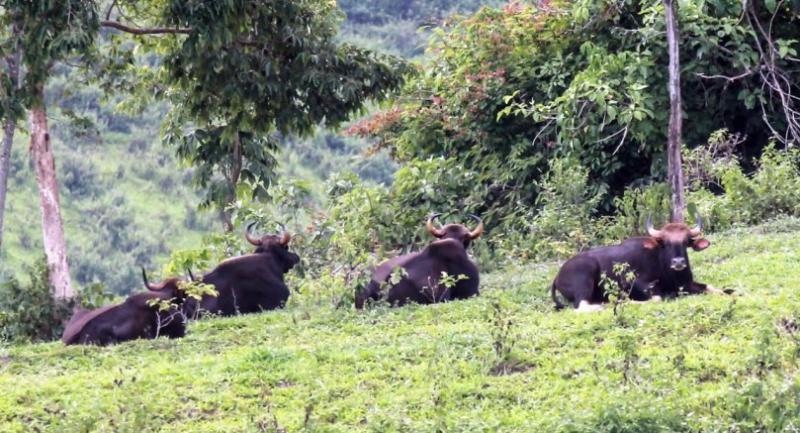 AUTHORITIES PLAN to solve the gaur overpopulation problem in Khao Phaeng Ma wildlife sanctuary in Nakhon Ratchasima by relocating some of the animals to a nearby forest.

Local people, however, say they would prefer a fence to prevent encroachment by the wild animals as their crops had been destroyed and they had not received compensation from authorities.

Nakhon Ratchasima Governor Wichien Chantharanothai yesterday revealed the plan to relocate some of the gaur population to the nearby Khao Phu Luang Forest to reduce the numbers in Khao Phaeng Ma Forest.

The move was agreed at a recent meeting with related agencies to tackle the conflict between local farmers and the animals after three gaurs were killed in a single week. “There are around 300 gaurs in Khao Phaeng Ma Forest and the number is still growing. The food source in the forest is limited, so the gaurs have to go out of the forest and feed on people’s crops, causing some gaurs to be harmed and killed by local farmers. This is why we have to urgently solve this problem,” Wichien said.

He said authorities previously had tried other methods to keep the wild animals out of people’s farmland, but they had not worked. The relocation of some gaurs to a nearby forest, which still had plenty of food, was the best way to tackle the conflict, he added.

The governor said it would not be easy to move the animals as the distance between Khao Phaeng Ma and Khao Phu Luang was eight kilometres. The plan would have to be undertaken carefully as the route passes through farmland and there would need to be negotiations with local people for their cooperation, he added.

Wichien also urged people to grow plants that are not food for gaurs and avoid harming the animals as it is against Buddhist teachings. Authorities would compensate farmers for crop damage, he added.

“The department is now helping Nakhon Ratchasima authorities to find the best method to relocate the wild gaurs and we are looking forward to having good cooperation with and understanding from local people,” Pinsak said.

Sawat Senasee, head of the Tambon Wangmhee Administrative Organisation, said local people did not object to the relocation plan but they did not believe the initiative would be successful because farmland had been an easy feeding ground for the wild animals.

“Even if the gaurs are moved to a nearby forest, they know that they can find food easily on people’s farmlands. They are going to intrude into our farmland no matter what,” Sawat said.

“We prefer a strong fence to protect our crops because there was no compensation at all for the farmers for the crop damage.”

Wichien said the DNP would consider a fence but Khao Phaeng Ma Forest covered five districts and a fence would be expensive and take considerable time to complete as well as require frequent maintenance.