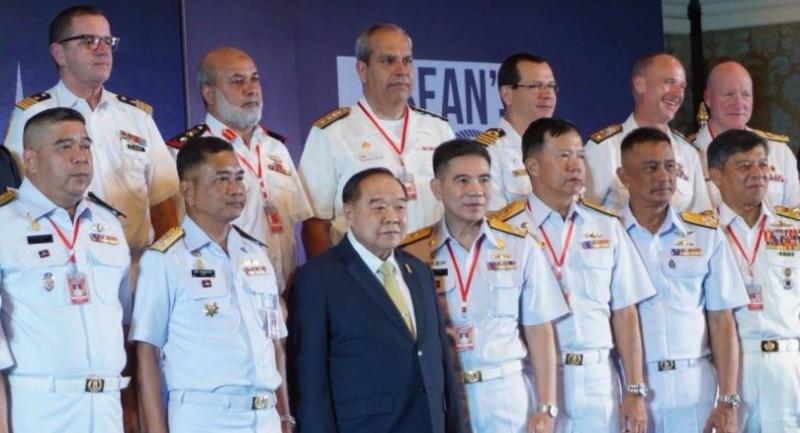 NAVY commanders-in-chief of the Asean countries have pledged to boost regional cooperation to protect the maritime environment and combat piracy by setting up an early warning system that links all member countries’ naval forces, according to Admiral Naris Prathumsuwan, commander-in-chief of the Royal Thai Navy.

Speaking at a conference of Asean navies in Pattaya, Chon Buri, Naris said member countries had also endorsed the adoption of “Asean Navies Stronger Together Forever” as the grouping’s official song.

Navy commanders-in-chief from the nine other Asean countries took part in the regional conference to mark Asean’s 50th anniversary.

Naris said member countries needed help from one another to protect the region’s maritime environment since all territorial waters were interconnected and no country could escape environmental damages in the open sea.

Nations such as the Philippines, Indonesia and Malaysia with long coastlines already cooperate closely but all Asean countries are meant to join in regional efforts to cope with emergencies and other challenges by setting up an early warning system for maritime environmental protection and tackling piracy and other threats.

Thailand is hosting the Asean maritime conference and related events with the participation of more than 5,000 officers and a total of 40 warships from 18 countries, which will join the International Fleet Review in Pattaya today.

Prawit, who yesterday presided over the opening ceremony of a related international maritime event, said the navies of Asean and other countries had consistently worked together to promote peace in the region and around the world, marked by joint naval exercises and other activities.

Regarding the South China Sea conflicts, Prawit said Asean countries had to work out the issue with China and ensure freedom of navigation in the area along the lines

of “Asean plus” frameworks.

These frameworks include “Asean plus 1” with China, “Asean plus 6” and “Asean plus 8”. Asean’s counterpart countries include China, Japan, South Korea, India, Australia, New Zealand, the United States and Russia.

Meanwhile, Prawit refused to comment on Thai politics when asked by reporters about speculation that he might lose the defence portfolio in the upcoming Cabinet reshuffle. Instead, Prawit turned to talk to other military top officers, including Deputy Defence Minister General Udomdej Sitabut.

Prayut is expected to announce his new Cabinet line-up shortly, the fifth reshuffle since taking office more than three years ago.