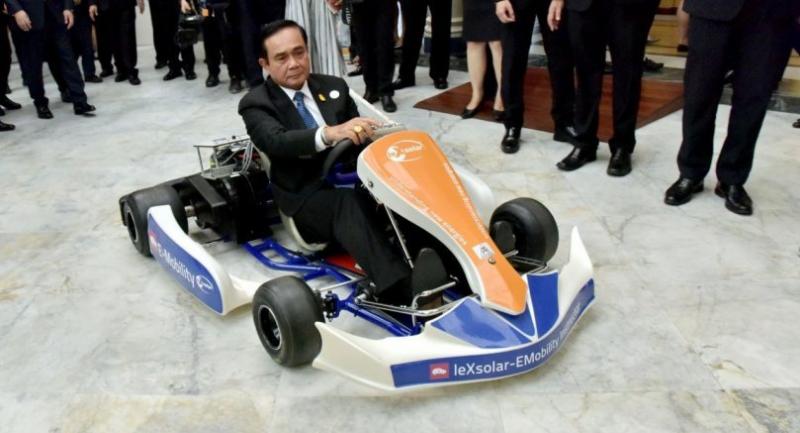 Prime Minister General Prayut Chan-o-cha drives an electric go-cart around Government House yesterday after it was brought to the compound as an exhibit of inventions by students in the Eastern Economic Corridor.

On Friday, the prime minister said he had finalised the fourth Cabinet reshuffle of his government and that the list was in the process of seeking royal endorsement. The matter was expected to be settled by next month, he had said.

On Tuesday, he was quoted as saying at the Cabinet meeting that the ministerial reshuffle was “nothing personal”, but all about work efficiency.

Government Spokesperson Lt-General Sansern Kaewkamnerd quoted Prayut as saying that the reshuffle was to enable utmost efficiency of his Cabinet’s performance. The PM urged those losing out in the reshuffle not to feel any hurt. If that were the case, he said, he would feel it the most since he was the one who had to make the decisions on who should leave and who should stay, the spokesman added.

His ministers so far have no idea about the new list. Deputy prime minister Wissanu Krea-ngam said on Monday that he was not aware to what extent Prayut had reshuffled the Cabinet, adding that he wasn’t even aware if he would be in the new line-up.

Another deputy prime minister, General Prawit Wongsuwan, said yesterday that his decision to continue working in the Cabinet would be dependent on his health.

Prayut said last Friday that his senior military senior classmates such as Prawit and Interior Minister General Anupong Paochinda, as well as his close friend Agriculture and Cooperatives Minister General Chatchai Sarikulya, would remain in the Cabinet. He also said that the number of military officers exiting the Cabinet would be more than those being inducted.

A source said former Interior permanent secretary Krisda Boonrat would take the top post at the Agriculture Ministry, while former reformer Wiwat Salyakamthorn would be his deputy minister. Wiwat has long been known in his educational work for his adoption of HM the late King Bhumibol Adulyadej’s Self Sufficiency Theory. Chatchai, meanwhile, would be compensated with the deputy prime minister post, the source said.