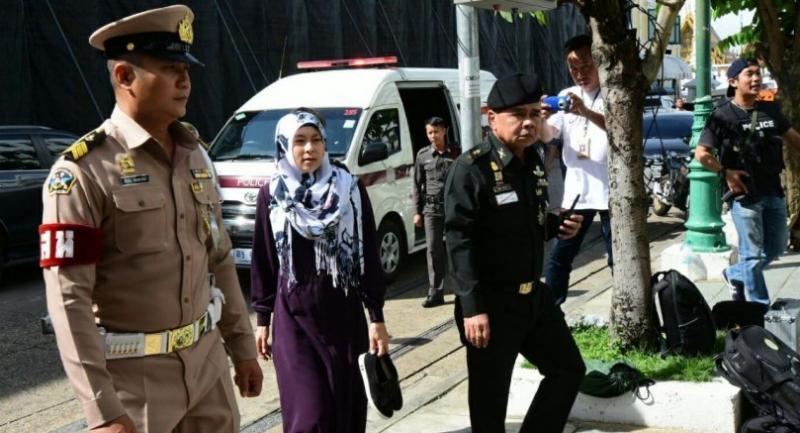 THE RELATIVES of Wanna Suansan, the only female suspect in the deadly Erawan Shrine bomb attack, plan to file a bail request on Monday.

And Wanna’s Turkish husband, Emrah Davutoglu, who is also a suspect, hopes to return to Thailand to face the allegations against him, Phang Nga village head Ibrohem Khomkham said yesterday.

Ibrohem accompanied Wanna’s family to Bangkok to apply for bail for Wanna who is being detained at the Klong Prem Prison. He is also her distant relative.

“The family has prepared title deeds [for their property] worth about Bt260,000.

“Upon our arrival here, we found out that the charges against her may require up to a Bt600,000 bond,” he said.

He said the family will try to find more assets that should qualify as bond and will submit the bail request on Monday.

“We believe she should be granted temporary freedom during court trials,” Ibrohem said. “She does not know any other suspect, except her husband.”

Ibrohem said Wanna and her husband were in Turkey when the bomb attack occurred.

“She left Thailand 59 days before the explosion, not just before the bomb blast as some news reports suggested,” Ibrohem said.

Wanna brought her two children with her when she returned to Thailand on Wednesday.

She is now pregnant with her third child.

“Her husband hopes he can join his family in Thailand in the future. Just like her, he insists that he did not have any role in the explosion. He too hopes that court trials will clear his name,” Ibrohem said.

Wanna is now charged with many counts in connection with the blast that struck the world-famous Erawan Shrine in the heart of Bangkok in 2015. The incident caused huge casualties. Among the charges against her is premeditated murder.

Wanna had lived under house arrest with her husband in Turkey for the past few years.

She is alleged to have rented rooms for suspected bombers Adem Karadag and Yusufu Mierali, who were friends of her Turkish husband.

Karadag and Mierali have been held in a special detention facility at 11th Army Circle headquarters in Bangkok pending court interviews with 100 prosecution witnesses.