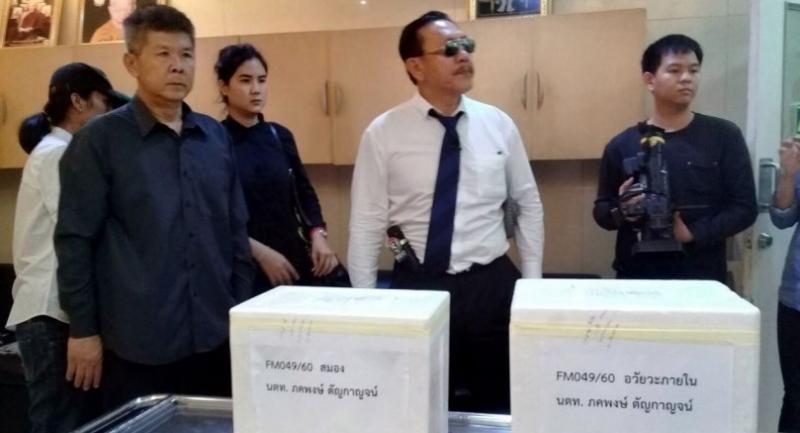 THE RELATIVES of an 18-year-old cadet who died at a military academy last month, yesterday received the organs that were removed from his body at Phramongkutklao Hospital and handed them over to the Central Institute of Forensic Science (CIFS) for further autopsy.

The Royal Thai Army has also set up an investigation committee to look into the cause of death of the first-year cadet at the Armed Forces Academies Preparatory School (AFAPS). According to his family, Phakhapong “Meay” Tanyakan died from harsh punishment inflicted by senior cadets. The parents of Phakhapong and his sister Supicha Tanyakan yesterday collected the brain, heart, stomach, and other internal organs from the military-owned Phramongkutklao Hospital.

The family had earlier approached the CIFS to perform a second autopsy on Phakhapong when it was found that some of his organs were missing.

CIFS director Som Promros confirmed receiving the organs from the family. He said the institute would inspect the condition of the organs before doing a DNA test to confirm that the organs belonged to Phakhapong.

Som also said that the CIFS would invite three medical experts on brain, heart, and forensic science from leading medical schools to join the CIFS staff during the autopsy.

“The average time for an autopsy is seven days. But as the relatives have told us they were not in a hurry and wanted the most accurate cause of death, it will take more time. As soon as the result is ready, the institute will inform the family and investigation team immediately,” he said.

Meanwhile, Lt-General Nothapol Boonngam, Royal Thai Army spokesperson, said that the Army and AFAPS had set up investigation committees to look into the cause of Phakhapong’s death, including the alleged harsh punishment inflicted by senior cadets.

Nothapol said that the investigation teams had already gathered and inspected all evidence including CCTV footage, the autopsy result, and witness accounts. He insisted that if anyone was found to have violated the rules, they would be punished because the military school has a strict rule on the punishment procedures.

Meanwhile, Prime Minister General Prayut Chan-o-cha stressed that military training has to be tough in order to produce strong soldiers. He also insisted that the hierarchy system and punishment by senior cadets would have to continue.

The Cross Culture Foundation also released a statement on the death of cadet student. The foundation urged that as Phakhapong had died in the AFAPS’ jurisdiction, the issue should be investigated clearly and transparently and addressed in a proper manner, especially since the government had made human rights its national agenda.

The foundation also requested that the Army abolishes inhumane and harmful punishments of soldiers, sets up a mechanism for minor soldiers to complain, and creates regulations to meet with the International Convention for the Protection of All Persons from Enforced Disappearance, which has been suspended by the government for more than five years.