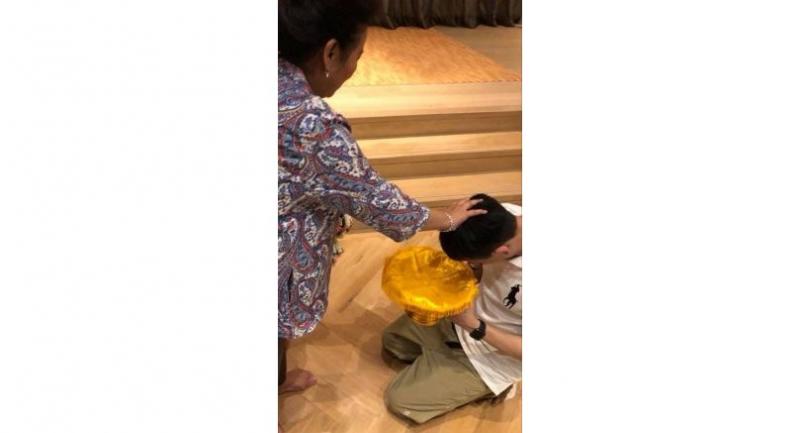 Panthongtae Shinawatra, the only son of fugitive former prime minister Thaksin Shinawatra, sought a birthday gift as he turned 38 on Saturday: to have the whole family back together, with no one involved in politics.

Panthongtae or “Oak” posted on his Facebook page that it used to be a tradition for him to prostrate before his father and mother on his birthday every year.

But over the past decade, he had no chance to prostrate before his father, he wrote, adding he would do so when he travelled abroad to see Thaksin.

“In the past ten years until today, my family members and I have always insisted that we just need to get our warm family back. And no one in my family wants to be involved in politics at all,

“If it becomes true, it will be the most precious gift for me and my family,” he wrote.

The status on his Facebook displayed a photo of his mother, Khunying Potjaman Na Pombejra, place her hand on Oak's head to bless him.

Oak’s father Thaksin has been living in self-exile since 2008 in Dubai after he fled the country before a verdict in the case against him of abuse of power over the purchase of state-owned land by his then-wife Potjaman. Thaksin was sentenced in absentia to two years in jail.

Oak’s aunt, former PM Yingluck, also escaped from the country in late August before hearing a verdict over her government’s controversial rice-pledging scheme. The court later sentenced her to five years in prison.

Panthongtae himself is facing a charge in a money-laundering case over a multi-billion-baht loan fraud linked to the state-owned Krungthai Bank.