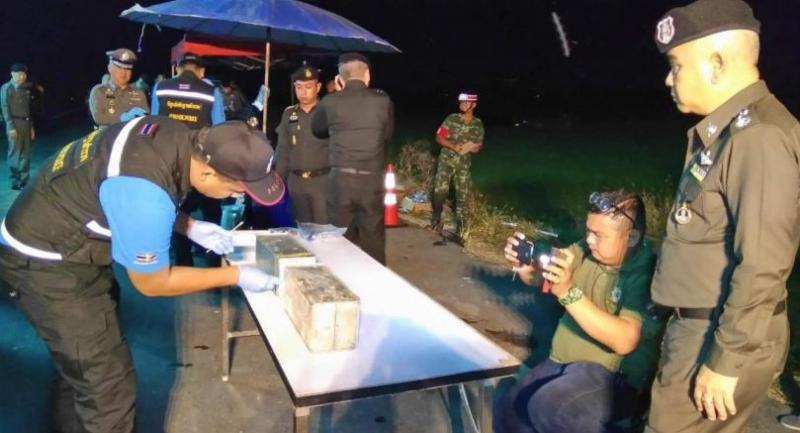 AFTER THE discovery of a cache of military-grade weapons was met with public scepticism as a possible ploy to maintain political restrictions and perhaps further delay the election, the junta yesterday linked the cache to well-known red-shirt leaders.

Prime Minister General Prayut Chan-o-cha and the nation’s army chief also reiterated concerns about the reported discovery and invoked it to justify the continued ban on political activities. Colonel Burin Thongprapai, a legal officer at the National Council for Peace and Order (NCPO) Supreme Command, had filed a complaint with the Crime Suppression Division on Friday against Jakrapob, Manas and three others – Wattana Sapwichian, Chaiwat Polpho and Somjet Khongwattana – a source at the Royal Thai Police said yesterday. The five were accused of possessing military-grade weapons and racketeering, the source said. The weapons linked to the Bang Nam Priao cache were reportedly from the same batch that the five suspects allegedly distributed to create chaos during the 2014 protests.

Jakrapob disappeared from public long before the coup in May 2014, while Manas reportedly turned himself in to authorities after the first charges were brought in 2014 and has since been free on bail. In 2014, Wattana was arrested for possessing military-grade guns, ammunition and explosives following the apprehension of Somjet, who allegedly had distributed weapons during the protests.

At the time, Wattana confessed to having received weapons from Somjet to redistribute, including to Chaiwat, but Wattana then reportedly dumped the weapons in Ayutthaya’s Lat Bua Luang district after the junta announced plans to punish people for weapons possession. He finished his 20 months jail term for the previuos case recently.

Meanwhile, national police chief Pol General Chakthip Chaijinda dismissed speculation that the discovery of the weapons in Chachoengsao was a false-flag operation.

He said he would not comment on politics, but added that speculation that the discovery had been a set up was untrue because Srivara, who oversees national security, “would not do it” and the weapons were real.

Prayut yesterday voiced concerns about a purported link between the weapons and the extremist militant Wutthipong “Ko Tee” Kachathamakul.

“The first finding is that the weapons belong to the same batch as found earlier. But to whom they are related will be investigated later,” he said.

When police revealed the weapons discovery last week, they presumed that they belonged to Wutthipong due to their serial numbers. Wutthipong fled to Laos after the coup in 2014 but his current whereabouts are unknown, with unconfirmed reports a few months ago concluding that he had been abducted and killed. A junta meeting yesterday also concluded that it would be inappropriate to lift the ban on political activities any time soon.

If political parties are adversely affected by the continuation of the ban, remedial measures will be taken, said General Chalermchai Sitthisat, NCPO secretary-general.

“Unless we have confidence [in the overall situation], we won’t let go [of the ban],” Chalermchai said.

The regime would provide a solution to the conundrum related to the requirement for political parties to make arrangements for the national election and the junta’s decision to keep the ban on political activities in place, Deputy Prime Minister General Prawit Wongsuwan said.

By continuing the restriction, the junta is taking advantage of the discovery of the weapons cache to consolidate power, said political scientist Titipol Phakdeewanich.

The NCPO was working to ensure a smooth transfer of military influence into post-election politics, he said.

In addition to the legislation that would facilitate an ongoing military presence in national politics, the junta also needed to build its political currency in the meantime, he added.