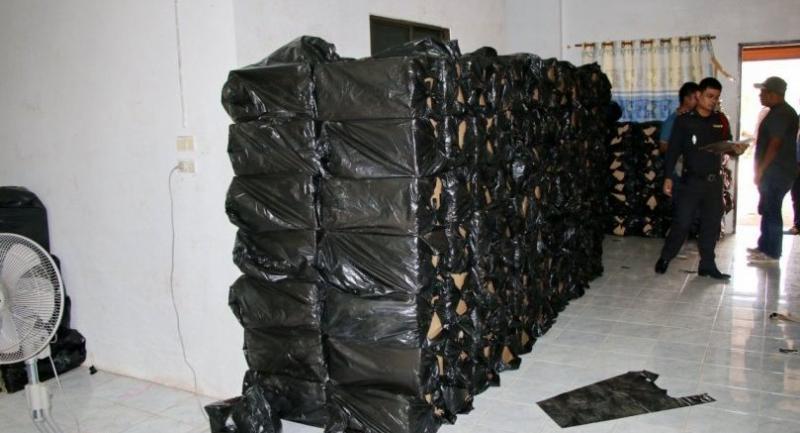 The search was conducted at 11am at two rented houses in Soi Padang Besar 3 in Tambon Padang Besar.

Provincial Police Region 9 deputy chief Pol Maj-General Ekkapop Prasiwattanachai, who led the raid, said the two houses had been used to store cigarettes smuggled from a neighbouring country without paying excise duties for distribution in Songkhla and other provinces. He said officers had staked out at the houses for days to arrest those involved but no one had showed up, so police raided the houses and seized the items.

Police will attempt to identify the house tenants and arrest suspects involved in smuggling, he added.

In a separate case in Sa Kaew’s Aranyaprathet district, police on Tuesday morning seized about 60 fake brand-name bags from three Cambodian men who were spotted sneaking into Thailand by crawling under a barbed wire fence into a wooded area near the back of Rong Klua Border Market. Officers chased the men, who dropped three sacks containing the counterfeit goods and fled back across to Cambodia.

Officials then found “mirror grade” handbags, which reportedly could be sold for Bt100,000.

Police suspected that the men were supposed to deliver the bags to vendors at the market for the New Year festival sales.