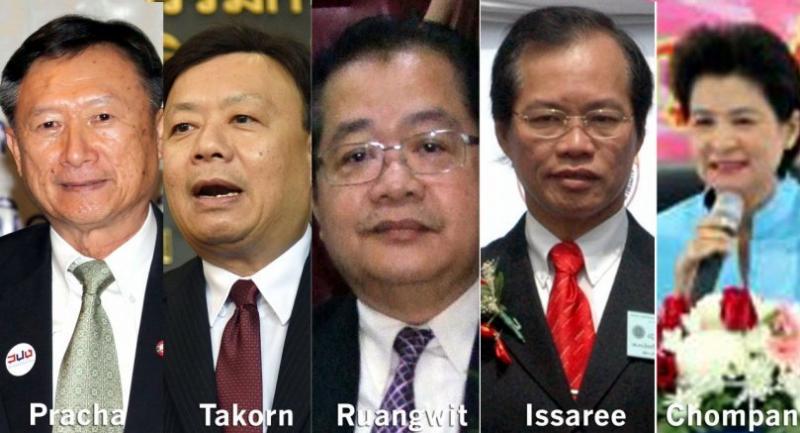 FIVE PEOPLE were selected yesterday to fill the vacancies in the Election Commission (EC) after each of them won two-thirds of the votes from the selection committee.

Among them were those considered as “shoo-in candidates”: Pracha Terat, a former high-ranking official at the Interior Ministry, and Takorn Tanthasit, secretary-general of the Office of the National Broadcasting and Telecommunications Commission.

Pornpetch Vichitcholchai, president of the National Legislative Assembly (NLA), announced the results yesterday after a meeting to interview and hear the vision of the 15 candidates who passed the qualification test. He said each of the five people selected had won more than two-thirds of the votes from the selection committee.

In the first round, only four people were selected, he told reporters. But since five people were needed to fill the positions, a second round of voting was held and Pracha selected, he said.

The selection committee’s conclusions concerning the five candidates need to be considered and endorsed again tomorrow. After that, the list of names would be proposed to the NLA for further endorsement, Pornpetch said, adding the schedule was uncertain.

Concerning complaints from people who fail to qualify, Pornpetch said the committee had already discussed the issue and agreed the selection process must strictly follow the law, adding that it was impossible for the committee to change the criteria.

He said it would not be fair to other contestants in other agencies who had been through a similar qualification test.

According to the organic law governing the EC, the commission comprises seven members, two of whom should be come the Supreme Court. Pornpetch said he had heard one person had already won a place and that the Supreme Court would convene today to select the other.

Failed candidates such as Peerasak Hinmuangkao, a former director of the Land Department, and Thawatchai Thaikhiew, a deputy permanent secretary of the Justice Ministry, said the selection committee had not explained why they did not succeed in their applications.

Peerasak said he believed it could have been for his shares in an energy company. However, this was not against the rules so he had already petitioned the selection result, he said.

Thawatchai said he could have been disqualified because he did not have the years of experience as required by the law. He did not appeal the result, saying that the process followed the rules.

The new Constitution as well as the organic law have given more power to the agency. EC members are empowered to not only organise elections but also reschedule or cancel them if poll fraud is suspected as well as issue red or yellow cards to people involved in the corrupt activities.