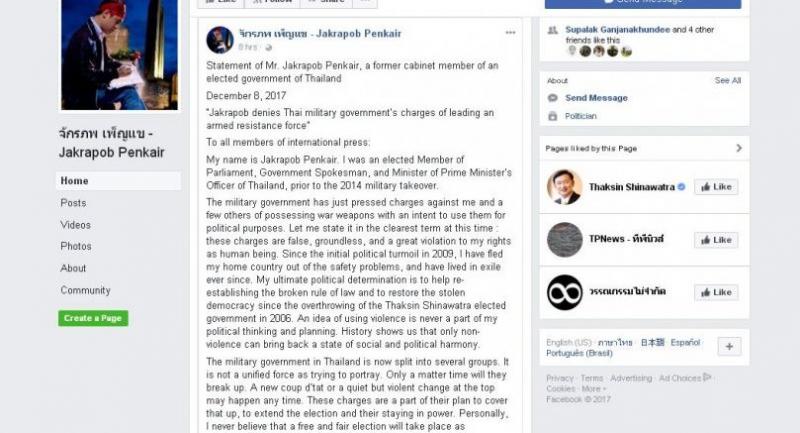 FORMER MINISTER Jakrapob Penkair, a prime suspect accused of possessing military-grade weapons, yesterday lashed out against the charges, saying he would take an “international trip” to clear his name.

It was unclear whether he was referring to returning to Thailand.

Jakrapob and four other suspects are wanted on arrest warrants issued last week in connection with the reported discovery of military-grade weapons in Chachoengsao’s Bang Nam Priao district last week.

“The military government has just pressed charges against me and a few others of possessing military weapons with the intent to use them for political purposes,” he said on Facebook yesterday.

Jakropob is known to be residing outside of Thailand.

The charges against him and the others were false, groundless and a major violation of human rights, he said, adding that he had left the Kingdom in exile since the political turmoil in 2009.

“Any idea of using violence has never been a part of my political thinking and planning,” he said.

While there was no information about Chaiwat and Somjet yesterday, Manas surrendered to authorities and was freed on bail on Thursday.

Meanwhile, Wattana was summoned and detained for questioning on December 1 and released on Thursday, according to junta Spokesman Maj-General Piyapong Klinpan yesterday.

Wattana had provided authorities with useful information, he said.

Wattana was convicted of crimes in 2014 related to military weapons and sentenced to 40 months in jail. Because of his confession, his jail term was commuted to 20 months and he had just completed the term.

Chakthip added that police had actually discovered military weapons periodically between 2014 and 2017.

“We have been closely monitoring groups related to national security, politics and social media mobilisation,” he said. “Without active intelligence operations, we would have not been able to seize the latest batch of military weapons.”

Prawit has ordered security agencies including the military, police and security officials from the Interior Ministry to gather information to prepare security measures for the public as well as measures for road safety, he said.

The information will include past statistics for crime rates, unrest, road accidents and casualties, as well as drugs, he said. The measure was expected to be implemented from this month until after New Year’s, Kongcheep said.