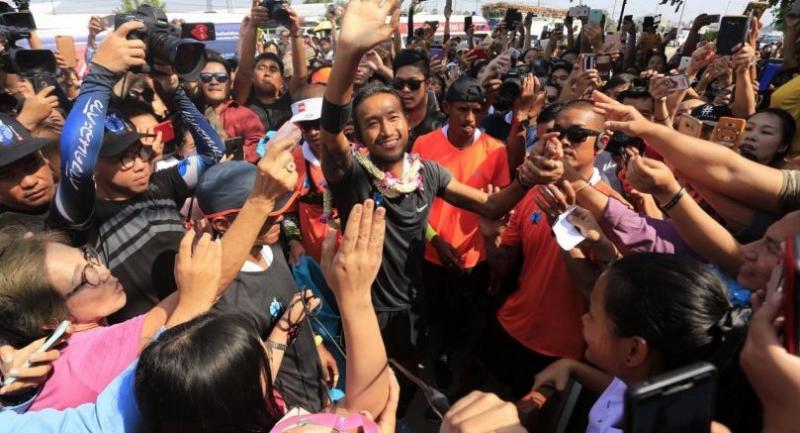 CHARITY HERO Artiwara “Toon” Kongmalai yesterday managed to reach Bt700 million – the goal set for his 2,191-kilometre marathon in support of 11 hospitals nationwide – at the halfway point of his epic run.

Toon started the first 14.5-kilometre leg of his run at the PTT petrol station on Bang Bua Thong-Chai Nat road in Suphan Buri at 3am. Many fans, including people from Suphan Buri and Chai Nat, waited along the roadside to cheer him on.

Artiwara was warmly received by a crowd at the day’s first stop, a CP Seed shop in Hankha, where he was treated to a choir concert and a check-up by a nurse. After a brief rest, Toon and his group ran the 12-kilometre second leg, joined by popular luk thung singer Koong Sutthiraj.

Many celebrities greeted Toon at the end of the second lap at the Tambon Sankhaburi Municipality in Chainat’s Sankhaburi district. At the second rest point, Toon was received by Maj-General Itthipol Suwannarat, commander of the 13th Army Circle, and Chainat deputy governor Parinya Phothisat. The two jointly handed Toon Bt2.152 million that Chainat people had donated for the fundraising drive.

During his second rest, Toon joined with the 13th Army Circle band to sing a popular song from his band Bodyslam, “Saeng Sud Thai” (“The Last Ray of Light”).