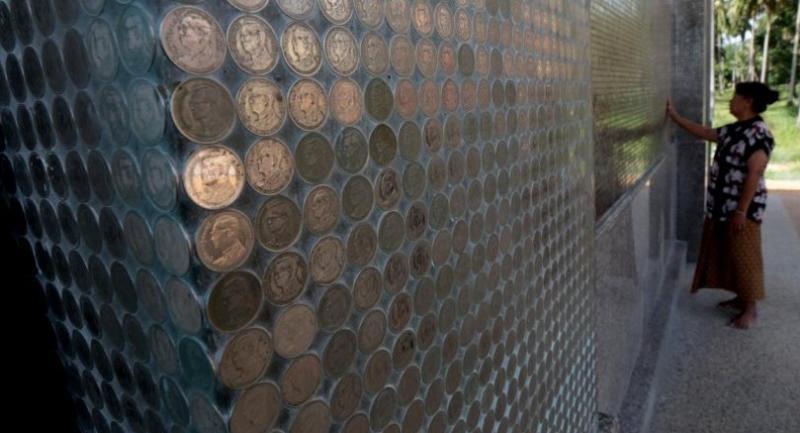 LOYAL SUBJECTS of His Majesty the late King Bhumibol Adulyadej have pooled their resources to gather one-baht and 10-baht coins to decorate a chapel in a show of love for the late monarch. The unique decoration of the so-called Rien Baht Chapel or “Chapel of One-baht Coins” is 75 per cent completed . Unlike other chapels, which are mostly decorated with marble and colourful paintings, the Rien Baht Chapel’s outer walls are covered with one-baht coins. It is expected that Bt3.7 million worth of one-baht coins will be required to completely cover the outer walls. The inside walls are decorated with 10-baht coins, of which an estimated Bt150,000 worth will be needed. The chapel’s construction started in 2014 and the temple invited Buddhists to help decorate it with coins on August 12, 2016, before King Rama IX passed away.

The construction is expected to be completed in 2019 with the final cost estimated at Bt10 million. The temple’s abbot said the chapel was built with the initial goal to teach Thai children the value of one-baht coins. As coins from the period of King Rama IX become scarce over time, the temple would become a living museum for future generations to study coins minted during his long reign, he said