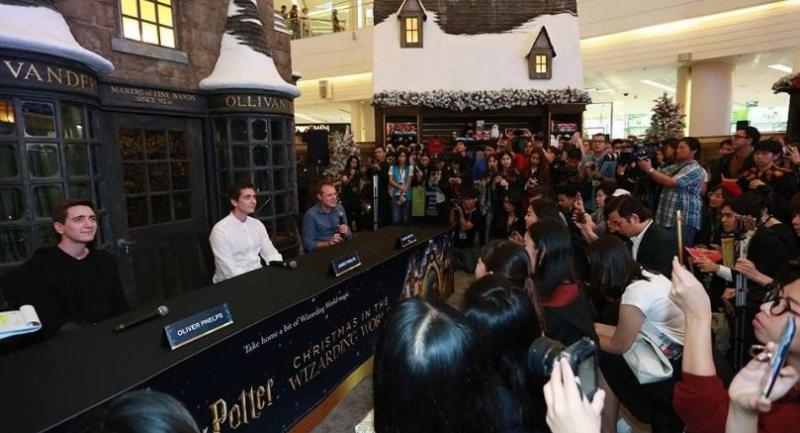 JAMES AND OLIVER PHELPS, who played twins Fred and George Weasley in the “Harry Potter” films, joined the grand opening celebrations of the “Christmas in the Wizarding World” exhibition at Siam Paragon yesterday.

The brothers have brought to Bangkok the holiday spirit from Hogwarts School of Witchcraft and Wizardry, in a touring exhibition featuring magical experiences from the film, which will run from today until March 2. It has been over 10 years since the last Harry Potter book was published, and six years since the final film in the series. Since then, the now 31-year-old English actors have grown up and ditched their red hair, but they were both happy to take a walk down memory lane to revisit their wizarding days.

They told The Nation that they had been looking forward to coming to Thailand since they heard about the project a year ago.

“We feel lucky to be here. This is very different – you won’t see it anywhere else,” said Oliver of the themed retail experience. “This is a massive world that essentially makes you feel like you are in Hogsmeade [the wizards’ village]. You can go into Ollivanders’ wand shop and have the wand experience,” said James. “It’s not you choosing the wand, the wand chooses you – just as in the film. So anything like that is a unique experience [for Thailand]. Normally you’d have to travel very far to get this.

“Even when you line up to come in, there are a lot of things going on. The windows are moving and you can interact with them.”

James also said he was especially impressed with one fan’s reaction yesterday when they were exploring the city. “She called me James, not even Fred. She said ‘Welcome to Thailand’ and smiled.”

The holiday exhibition also features the newest Harry Potter-themed retail experience, which is reminiscent of the atmosphere of wintry Hogsmeade village and Diagon Alley, the fictional London shopping street for wizards.

Complete with an extensive wand assortment, film-inspired window displays and interactive elements for muggles, Wizarding World is certain to be a hit with fans of JK Rowling’s magical creations. The exhibition has been brought to Bangkok by Warner Bros Consumer Products and international exhibition organiser GES.

“Christmas in the Wizarding World is very special here because it is the only one in Asia. The other one is in the United States,” said Robin Stapley, vice president of design and creative for GES.

“There is such an amazing fan base for Harry Potter here – and we have been around the world. We’ve recreated the magical settings of Hogsmeade and the snow experience, so they can experience this innovative environment inspired by Harry Potter.”

Along with Ollivanders Wand Shop, which is outfitted with soaring shelves of hundreds of precariously stacked wands boxes, there are also recreations of Honeydukes sweet shop, Madam Puddifoot’s Tea Shop, and Dervish and Banges, which sells magical instruments. Also on sale are Hogwarts school robes, fan-favourite plush owls and other themed merchandise. Other activities include a memorable photo opportunity, featuring a selection of background options from the “Harry Potter” films as well as an interactive “quaffle toss” game, where guests can score a goal amid a colourful display of Quidditch-themed items.

Entry is free, but space is limited. Customers can avoid queuing and reserve a specific entry time by paying a pre-booking service fee of Bt100.