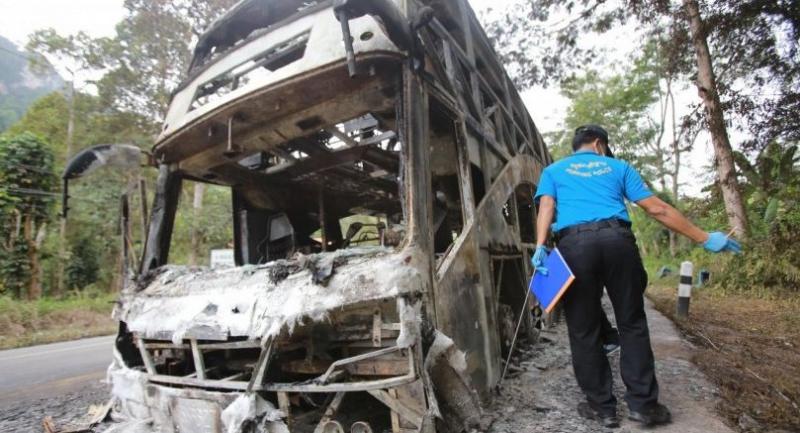 He said yesterday it was still unclear which groups were responsible for the arson and distribution of leaflets.

Citing the Cabinet’s approval of a three-month extension of the emergency decree in the deep South until March 19, Wanlop said he would visit the region next month.

Four suspects with possible links to the arson were being questioned, according to national police chief Pol General Chakthip Chaijinda, who visited Bannang Sata with fellow senior officers yesterday.

A police source said one of the suspects owned a petrol shop where the attackers were believed to have assembled and another was a woman who allegedly brought them changes of clothing.

Chakthip said police were also interviewing 20 witnesses. No motive for the crime had been totally ruled out, with speculation that the attack could have been carried out by a pre-existing militant group, conducted to secure financial benefits or have been a militant training operation.

No one was injured in the attack as the assailants ordered the driver and passengers off the bus before setting it alight.

Meanwhile, Yala police chief Pol Maj-General Kritsada Kaewchandee said he suspected that the leaflets found in Bannang Sata were the work of “opportunists”.

Police examining the leaflets, which were printed in Thai and reportedly signed “Fatoni warriors”, had collected DNA samples that could identify the people behind them, Kritsada said.

Officials noted that the leaflets were not written in the local language of Malayu and did not bear the emblem of any particular organisation as had been seen before.

Kritsada said police, soldiers and administrative officials would also increase security ahead of and during New Year celebrations.

Meanwhile, Deputy Defence Minister General Chaichan Changmongkol said the Internal Security Operations Command Region 4 Forward Command was investigating the incident to determine the motive and whether profit-seeking had been involved.

Taxi drivers in the Talad Seri area in urban Nakhon Yala were working normally yesterday, with several saying they had not heard about the leaflets.

Driver Budiman Jehtahe said he and 40 other drivers in the area would keep working normally as many people still needed to go to Betong.

“I’m confident about travelling on that route,” he said. “The authorities are keeping it secure. Some spots are rather isolated, though, so they should be paying more attention there.”