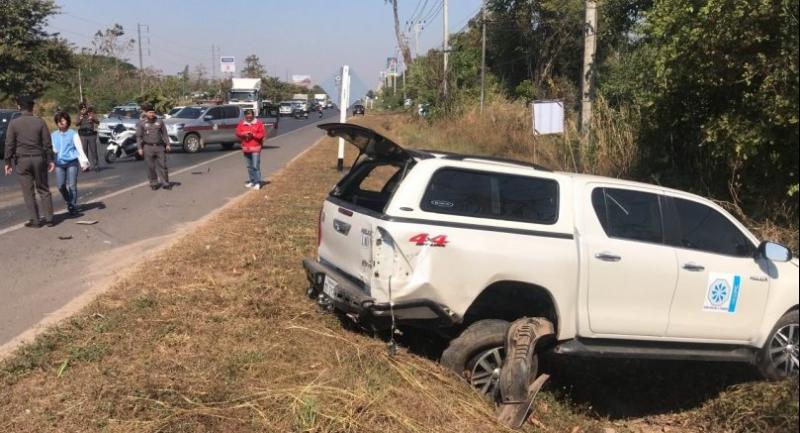 THE Academic Centre for Road Safety said yesterday that drunk driving remained the issue of greatest concern regarding road safety, as people may celebrate for a longer time during the upcoming holidays compared to previous years.

Technology and public surveillance will be used to help prevent road accidents during the New Year holidays, authorities said. And the Academic Centre for Road Safety has disclosed that drink-driving remains the most concerning issue, as people tend to celebrate for a longer period at this time of year.

The Police and Probation Department said it will increase the use of electronic tools such as speed detectors, alcohol testers and in-car video recorders to promote road safety and enhance traffic law enforcement to lower the accident rate.

The New Year period is among the most fatal for road users. According to the Road Safety Operations Centre, during the seven-day monitoring period for New Year last year, there were 4,128 injuries and 478 deaths from 3,919 road accidents. This represented a rise on previous years.

The same research showed that the top five reasons for road accidents were: driving while drunk, speeding, cutting in front of another vehicle, recklessly riding a motorcycle and poor visibility on the road.

Deputy police commissioner-general Wirachai Songmetta said police will use technology alongside more checkpoints to assist the enforcement of traffic laws and stop dangerous driving behaviours during the festive period.

Wirachai said that more than 5,000 speed detectors and alcohol testing units had been distributed to police stations nationwide.

Additionally, the highway police will arrange special routes for motorists during peak periods to relieve traffic congestion. A total of 92,746 police officers will be stationed at traffic checkpoints and at about 2,000 accident black spots around the country, he said.

“We are encouraging people to assist police by monitoring traffic offenders and promoting road safety. People who have a video recorder installed in their car can send footage of bad behaviour on the road to the police, so officers can use it as evidence to punish traffic offenders,” he said. Because drunk driving is the most prominent cause of traffic accidents and the number of cases increases every year, Probation Department director-general Prasarn Mahaleetrakul also revealed plans to increase the penalties for this offence and announced the introduction of a new method of probation involving electronic monitoring bracelets.

Prasarn said most people on drink-driving charges were first-time offenders and they generally did not reoffend. However, the monitoring bracelet would be used on those persons who had a high risk of reoffending.

“The department has ordered 4,000 more electronic monitoring bracelets for this task. However, this measure won’t be ready to implement in this New Year period, as the order will arrive around the middle of next year,” he said.

Director of the Academic Centre for Road Safety, Thanapong Jinvong, said monitoring of public behaviour during New Year holidays in previous years had shown a discernible change in the last two years. More people were using private cars than public transport, and they tended to leave earlier to attend celebrations and return later than usual.

“This shows that people have more time to celebrate – be it in their hometown or at a tourism destination – and that increases the risk of accidents through drink-driving,” Thanapong said.

“Therefore, we should focus more in monitoring local roads and campaigning against driving while drunk.”