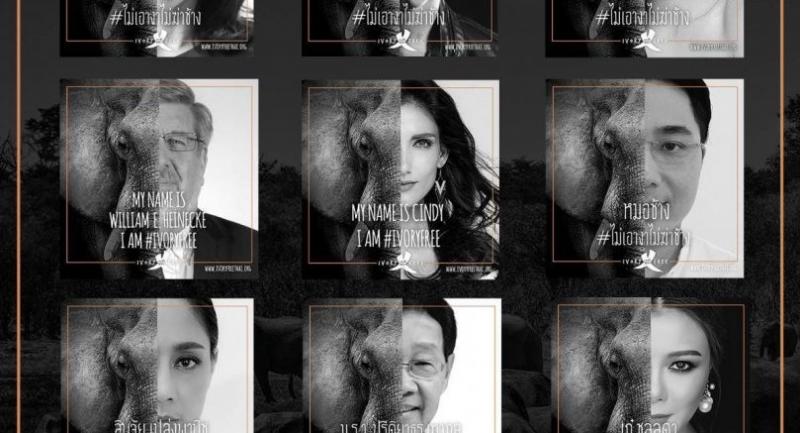 Commemorating Thailand National Wildlife Protection Day on Tuesday, the US Agency for International Development Wildlife Asia programme and WildAid announced that their recent online pledge campaign, “I am #IvoryFree”, received over 87 million views of social-media photo posts mobilising Thais never to buy, own or accept ivory as a gift.

Launched in September, the campaign engaged more than 100 Thai celebrities and high-profile influencers from business, entertainment, politics, sports, art, culture, religion and the press, as well as 15,200 members of the public to pledge “I am #IvoryFree”.

“We need to change the perception that ivory is a symbol of status and wealth. The ‘I am #IvoryFree’ campaign has proven to be a great way to involve the Thai public in helping the world understand that consumer decisions have a direct impact on the poaching crisis,” said US Ambassador Glyn Davies, who joined the campaign in September.

As part of the campaign, social influencers ranging from celebrities to politicians, business leaders, diplomats, beauty queens, reporters and sport stars invited all Thai people to create an ivory-free photo at www.ivoryfreethai.org and post their image on their social media profiles with a message on why they are making the pledge with hashtags including #IvoryFree.

The campaign also invited popular social media platforms to integrate and use messages from this campaign to create their own content suitable for their followers.

The illicit trade of ivory and poaching claims up to 33,000 elephants globally per year. Many governments around the world have banned the domestic sale of ivory. The Thai government has taken several steps towards this goal, including introducing the Elephant Ivory Act and prohibiting the sale of African elephant ivory.

Ivory Free is an initiative of WildAid, running in China, Hong Kong, the US and Thailand since 2014.

“The ‘I am #IvoryFree’ campaign shows that the Thai public is doing what they can to help save elephants from the poaching crisis,” said John Baker, managing director of WildAid. “We hope to see less tolerance for ivory in society and much less demand, because when the buying stops, the killing can too.”