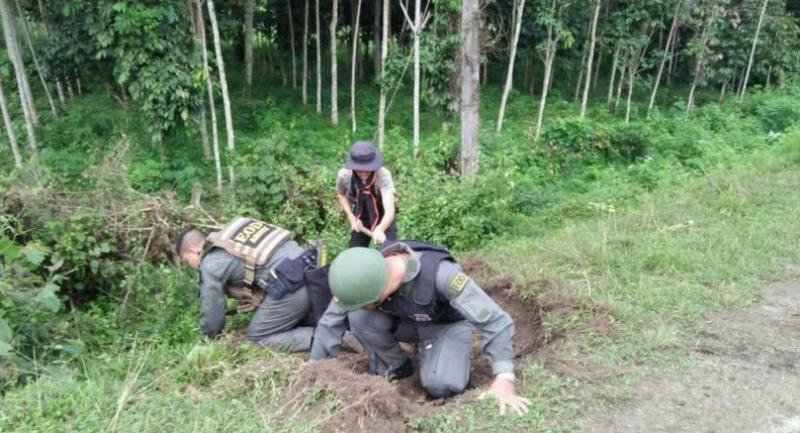 Militants are suspected of planting and detonating a roadside bomb targeting the five-member team of teacher protection patrol rangers, but nobody was killed or injured as the explosion was directed toward roadside bushes.

The bomb went off at 7.25am near a bridge in Ban Sawor Hilae (Moo 6) in Tambon Sawor, as the last ranger passed within 10 metres of the explosion, which was focused in another direction. Police officers inspecting the scene found a 30-centimetre-deep, 1.2-metre-wide crater with bomb fragments.

They said they suspected the explosives were placed in a 10-kilogram metal box and detonated by a communication radio.

Police believe the explosion was part of the region’s unrest ahead of the New Year festival to affect public morale.

Meanwhile, authorities on Wednesday night apprehended another suspect over the torching of a Betong-Bangkok bus in Yala’s Bannang Sata district.

Aslan Doloh, 34, wanted under an arrest warrant issued by the Yala Court on December 18, was arrested at his home in Pattani and sent for interrogation at a military unit in Pattani. On December 17, armed militants commandeered the bus and ordered out 16 passengers before setting fire to the vehicle. Four suspects were earlier captured by security authorities.

Earlier this week, the improved security under the ruling junta was said by monitors to contribute to the fact that the death toll |this year from the insurgency |in Muslim-majority deep South had been the lowest since the conflict began 13 years ago, AFP reported.

The three southernmost provinces of Pattani, Yala and Narathiwat have been in the grip of a low-level but bloody insurgency since 2004 and nearly 7,000 people have died.

About 235 people died in 2017 as a result of clashes between the Muslim-Malay insurgents and Thai soldiers and police, according to figures collected by conflict analysts Deep South Watch.

“We have seen the incidents going down for the past three years. And this year’s death toll is the lowest ever if no significant incidents happen in the coming days,” a Deep South Watch spokeswoman said.

In efforts to solve the unrest that had flared up since 2004, the junta that seized power in 2014 has continued peace talks but they appear to have made little headway. Discussions to set up so-called “safety zones” have been held with an umbrella group that claims to represent the rebels, but no agreement has been made public.

However, the Deep South Watch said the reduced death toll could be linked to continuing talks |and government development schemes.

Thailand-based independent analyst Don Pathan speculated the reduction was probably a combination of factors, including more government informants on the ground, a tighter security operation and more targeted strikes by insurgents.

“The bombs are bigger and more intense,” he said, adding that |militants were essentially being told to “make it count” and be more careful to avoid collateral damage.