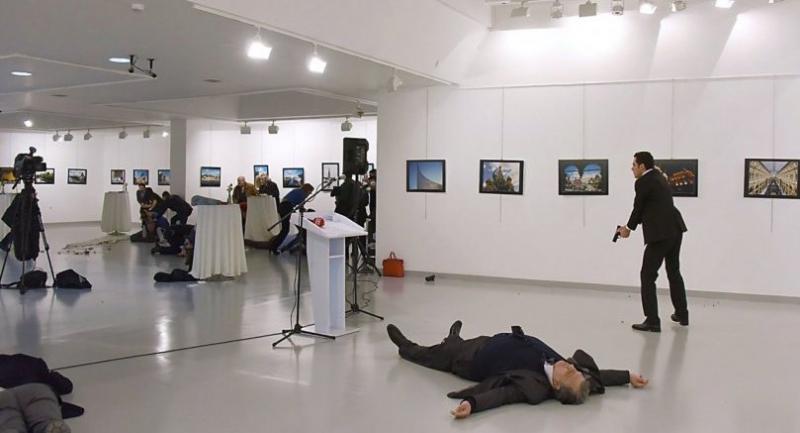 (FILES) This file photo taken on December 19, 2016 shows Andrei Karlov (2R), the Russian ambassador to Ankara, lying on the floor after being shot by Mevlut Mert Altintas (R) during an attack during a public event in Ankara. / AFP PHOTO

Turkey has arrested the organiser of a photographic exhibition in Ankara where a gunman last December shot dead the Russian ambassador, state media said.

Mustafa Timur Ozkan was remanded in custody by an Ankara judge on charges of deliberate participation in a murder, the official Anadolu news agency said. Ozkan, who had organised an exhibition of Russian landscape photographs at the gallery in Ankara's upscale Cankaya district, had initially been detained in January but then released.

Ambassador Andrei Karlov was on December 19, 2016 shot dead by off-duty Turkish policeman Mevlut Mert Altintas, 22, while inaugurating the photo exhibition. Turkey has said the murder was a plot carried out by the group of US-based preacher Fethullah Gulen who stands accused of staging the 2016 failed coup. But Moscow has yet to echo this.

Turkey has arrested five suspects in connection with the plot, alleging they have links to Gulen's group, including television producer Hayreddin Aydinbas. There were fears the killing would again derail relations that had only been put back on track that summer with a reconciliation deal after the November 2015 shooting down by Turkey of a Russian war plane over the Syrian border.

But relations have since gone from strength to strength, with Moscow and Ankara cooperating over Syria and President Recep Tayyip Erdogan and Russian counterpart Vladimir Putin meeting eight times in 2017 alone.