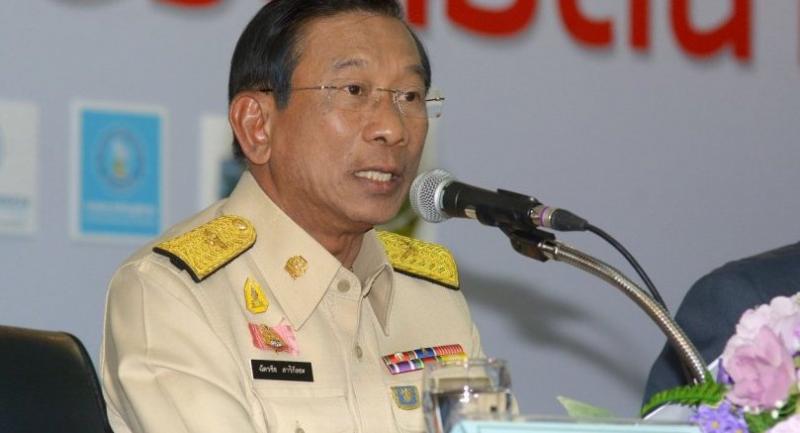 THE GOVERNMENT plans to use the special power granted by the National Council for Peace and Order (NCPO) to speed up recruitment of officers for the newly created National Water Resources Management Office so as to prepare for floods next year.

The government’s challenge now is to get the organisation staffed and up and running.

Deputy Prime Minister General Chatchai Sarikulya said yesterday that he would consult with the head of the government’s legal team, Wissanu Krea-Ngam, after the New Year holidays to discuss options for speeding up procedures to jump-start work at the office.

One option is to invoke the NCPO’s powers under Article 44 of the interim charter, said Chatchai.

“As of now, this new agency only has Somkiat Prajumwong as director of the agency, so this new office still cannot operate despite my discussing this issue with the Civil Service Commission Office [OCSC] and other related agencies to speed up personnel recruitment,” said a frustrated Chatchai. “But it was found that it will take too long a time to proceed using the normal process of the OCSC.”

The National Water Resources Management Office was created through NCPO Order 46/2560 on October 25, but remains non-operational and with only the agency director in place. Somkiat said management of the nation’s water resources would see major improvements starting 2018 as the agency takes control of overall water-policy planning and the new Water Resources Bill becomes law.

“Right now the government is working hard to get [the office] ready to work as soon as possible and I expect that by mid-January there will be 80 officers, of a total of 200, appointed to new positions in this office. That would allow the office to start operating,” said the director.

“This will be the new step in the country’s water management,” said Somkiat. “This issue was previously dealt with by separate agencies, who lacked proper coordination. That resulted in duplication of work and mismanagement.”

As part of taking control of all water management policy next year, the agency would oversee related budgets, water-management policy and planning, and project oversight. The new agency will be the central coordinating body for all relevant agencies to work together and share information.

Meanwhile, Seree Supharatid, director of the Rangsit University’s Centre on Climate Change and Disaster, has concluded that the series of floods experienced throughout Thailand in the past year was comparable to the major flood of 2011.

His monitoring of the Chao Phraya River at Nakhon Sawan found that the water volume was 12 to 34 per cent lower than in 2011, but that riverside communities had to endure the flood for an equally long period of time as during the big flood of six years ago.

That underlined the urgency of tackling flood and water-management issues, said Seree.

The Northeast faced larger precipitation in 2017 than in 2011, Seree’s research found. The increased volume of rainfall caused the levels in many reservoirs to rise beyond their capacity, forcing the reservoirs to discharge water beyond what rivers were capable of absorbing and creating a downstream domino effect along the river’s length.

“The floods this year showed that the authorities still lacked proper monitoring and warning systems for the people,” Seree said. “This resulted in heavy flood damages, while the most prominent problem of water management is the lack of risk assessment to select a proper solution for all stakeholders.

“I suggest that water management be done as a whole and not to solve [issues] point by point, which will only push the problem to the another area and cause conflict.”