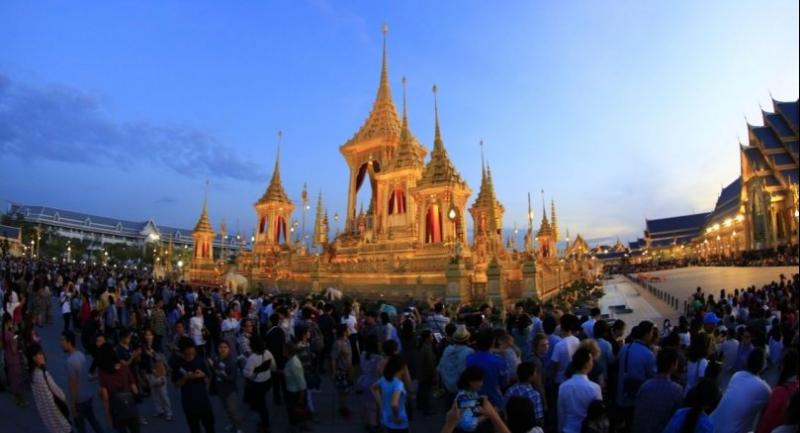 AS 2017 came to a close last night, so did the Royal Crematorium exhibition that had been open to the public since November 2.

During the past two months, about 4 million people had visited the Royal Crematorium ceremonial grounds in remembrance of much-revered HM the late King Bhumibol Adulyadej (King Rama IX).

The late monarch passed away on October 13, 2016 with the mourning period lasting more than one year and the Royal Cremation Ceremony held over five days in October

Exhibitions on the ceremony and his life were then held at the Crematorium grounds and |people were allowed to visit between November 2 and yesterday.

“I am much impressed. The Royal Crematorium is grand and marks a proper farewell to the great King,” a visitor said yesterday.

He added that the exhibition had also featured knowledge that proved practical in his daily life. “I plan to apply it,” he said.

A woman from Pathum Thani province said she went to the exhibition with her family. “I am very impressed.

And from now on, I will embrace the late King’s Sufficiency Economy philosophy,” she said.

As the exhibition has already concluded, the Culture Ministry is set to start deconstucting the grand Royal Crematorium later this month.

By tradition, the Royal Crematorium will not be kept and the deconstruction is expected to conclude before the end of March.

Culture Minister Vira Rojpojchanarat recently said wood and metal from the Royal Crematorium would be used to build a new museum in Pathum Thani province.

“Spanning over four rai [0.64 hectares] of land, the new museum will cost about Bt80 million. The exhibition space is around 10,000 square metres, including the Anodard Pond at the Royal Crematorium,” said Anan Choochote, director-general of the Fine Arts Department.

Parts of the Royal Crematorium will also be displayed in the new museum.

The new museum, which is expected to open in 2020, will be located in a 200-rai compound tha will also house the Supreme Artist Museum and the King Rama IX Archive.