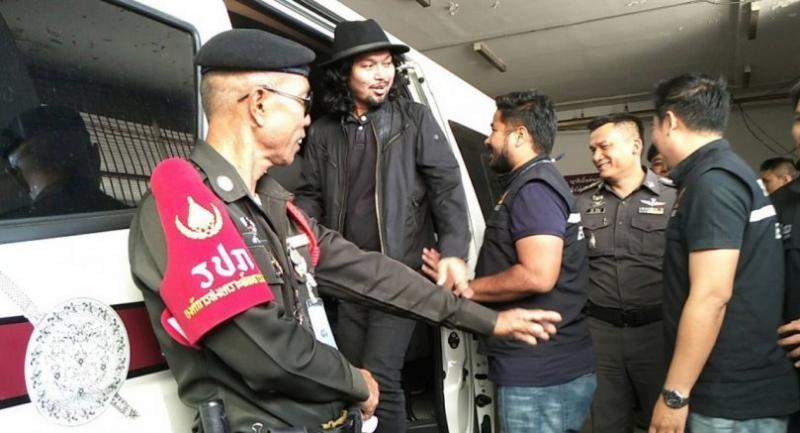 Rock star Seksan Sukpimai, better known as “Sek Loso”, is released on bail yesterday in relation to drug use charges. He was then rearrested and transferred to Nakhon Sri Thammarat police for allegedly firing a gun into the air.

CONTROVERSIAL rock star Seksan Sukphimai, who is also widely known as “Sek Loso”, posted bail after being arrested at his home on Sunday but he remained in police custody on further charges related to obstructing a police operation.

Min Buri Provincial Court yesterday granted bail for Seksan on a guarantee of Bt150,000. But he was then taken to Phrom Kiri Police Station in Nakhon Si Thammarat to face further charges. Police said he possessed an unregistered gun and there were traces of narcotics in his urine. Earlier Friday, Seksan broadcast himself on Facebook Live shooting a gun into the sky inside a temple compound in Nakhon Si Thammarat.

He had missed two concerts – in Nong Khai and Pattaya – as police were hunting him, and he was later captured at his home in Bangkok on New Year’s Eve.

However, after an armed confrontation between police and Seksan at his home, police issued a further charge of resisting a police operation.

Sing said a search of Seksan’s house has uncovered an unregistered gun, which Seksan claimed belonged to his friend. An initial urine examination also discovered traces of methamphetamines, with further results expected in two days. Seksan claimed that his urine turned purple after the narcotics test because he had taken sleeping pills. He also apologised for his reckless behaviour by shooting in public and confronting police with a gun. He admitted that this set a bad example, which he had not intended to do. His ex-wife, Wiphakorn Sukphimai, said she could not confirm that Seksan was under the effect of drugs, because she did not see him using them. She said she did not know about the gun that her ex-husband claimed belonged to a friend, but she knew that he had two registered guns.

Two planned concert appearances were affected by Sekan’s absence. The owner of Khong Eye Villa Resort in Nongkhai Phuchong Chanantho, who hired Seksan for a concert at his resort on Saturday, revealed that he planned to sue the star because he had violated his contract to perform.

Phuchong said the resort had signed the contract with Seksan’s band in March and had already paid him. His absence caused many fans to cancel their tickets and the resort had to refund the full purchase price.