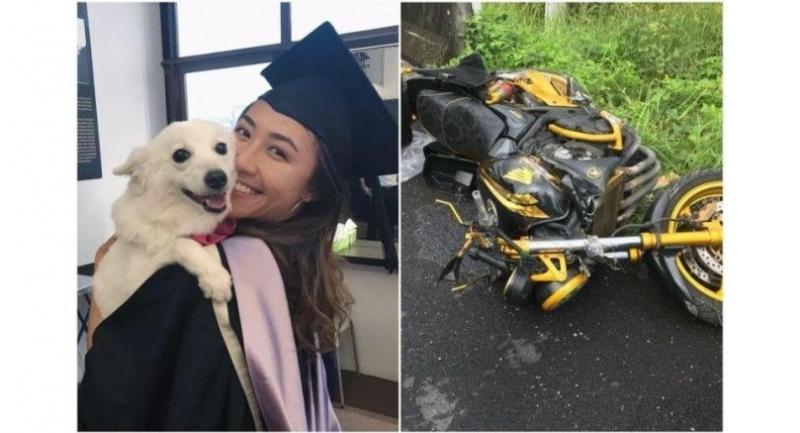 By THE STRAITS TIMES

SINGAPORE - The second Singaporean involved in a horror motorcycle accident in Thailand on New Year's Eve died from her injuries just past midnight on Monday.

Vanalyn Png, 22, had been in intensive care at a local hospital suffering from broken arms and internal bleeding in her head and abdomen, according to her brother Jervis.

"The doctor tried hard, but they couldn't save her. Vanalyn fought the battle bravely and she lost... She's now in a better place," he said in a Facebook post.

Png was a passenger on the motorbike driven by fellow Singaporean Ng Yong Sing, 27.

Ng died when the pair was thrown into a three-metre deep drain in the southern Phatthalung province, according to reports.

A local rescue group, Rescue Phatthalung, said the accident had occurred at 1.20pm on Sunday. The Singapore-registered motorcycle is believed to have skidded on a wet road.

Png, 24, and his sister Vanessa Png, 25, told The Straits Times at their Woodlands flat that their sister was a vocal and affable person who enjoyed sports, once helming the Singapore Polytechnic marathon team and captaining the basketball team in secondary school.

Both Ng and Png were employees at the Select Group food and beverage chain, they added.

Ng was a business development executive who had recently received a scholarship from the company, while Png started as a marketer less than six months ago.

The two had left for Malaysia on Saturday and were due to return to Singapore on Tuesday.

But Png's siblings said their sister had not told the family that she was heading to Thailand. They were also not told that she was travelling with Ng or doing so on a motorcycle.

"If she had told us, we would have discouraged her from riding a motorcycle there. We were under the impression that she was taking a bus with friends," said Png, describing his sister as an independent spirit.

The motorcycle, a Honda CB400 Super Four, is believed to have belonged to Ng.

Ng, whom the Pngs described as outgoing and just as talkative as their sister, had visited their family three times in the past year on a similar motorcycle.

The parents from both families are heading to Thailand to retrieve the bodies, said Png.

The Straits Times understands that the Singapore Embassy in Bangkok is helping both families.

This was the fourth reported case last month (December) of a fatal traffic incident involving Singaporeans in a foreign country.

A day earlier, interior designer Koh Yuan Ling died while travelling in South Africa with her sister, who has since been discharged from hospital.

On Dec 11, Seow Kai Yuan was killed in an accident in New Zealand on State Highway 6 on the west coast of the South Island.