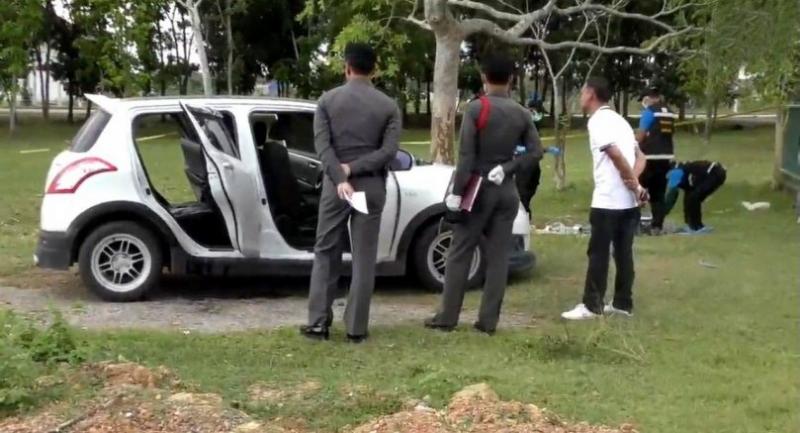 A 26-year-old man who claimed to be in a two-year relationship with Trang-based salon owner Phakin Sornnarai, whose body was found on Monday, has been initially charged with theft and possession of stolen items.

Police said that the suspect, Peerapat Phetchphrom, had confessed that he was having sex with Phakin, 32, in the latter’s car when Phakin suddenly developed a seizure and passed out. Peerapat, who reportedly had been crying and appeared stressed, said he then fled with Phakin’s gold ornaments, including a two-baht necklace, a three-baht bracelet and two rings, each weighing one baht, and Bt10,000 in cash. He added that he subsequently sold the gold and spent the money.

Reportedly, he claimed that he had met Phakin on Facebook and had had a relationship with him for two years. Peerapat added that he had been “astonished” by the incident so he had not sought help for Phakin.

He was arrested at an apartment on Tuesday with an unidentified man with whom he also reportedly had a relationship.

Both were brought for interrogation but only Peerapan was charged with a criminal offence, including theft and possession of stolen items.

Phakin’s body was found on Monday in his car parked at a sports stadium in Muang Trang. He had been missing since Friday.

Police believe robbery was a possible motive for murder because more than Bt160,000 worth of gold accessories, Bt80,000 in cash and a phone were unaccounted for. There was no information available about discrepancies between those belongings and the money and items reported by Peerapat.

He said autopsy results from Songklanagarind Hospital were pending, and he believed the actual killer or killers would be arrested later this week.

Phakin, a makeup artist whose salon catered to brides, became the subject of a missing person’s report on Saturday, the day after he went missing.

His relatives alerted police and friends appealed on social media for help in finding him, posting photos of his car that led to it being found at Thung Chaeng Stadium. His body was found in the rear seat. Police learned that the car had been driven into the stadium at around 8.30pm on Friday, in line with a medical examiner’s estimate that Phakin had died three days before he was found.