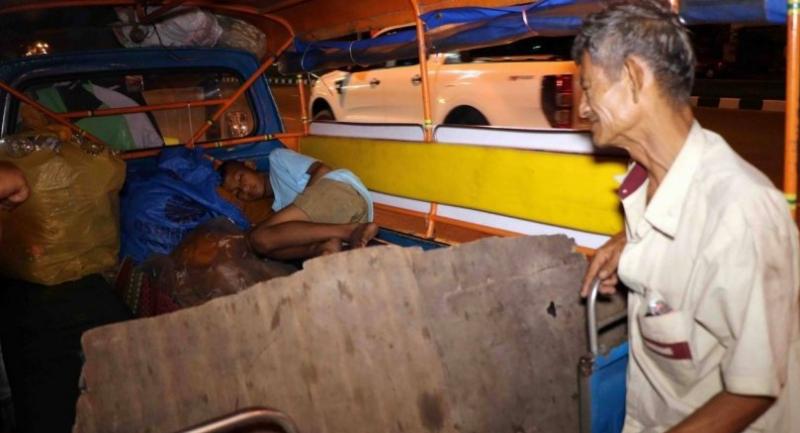 For other children, National Children’s Day this Saturday will be a time for celebration. But for Kampanart “Parn” Tipparat, 10, of Songkhla province, it will be just another day for him and his father, who lived in a tuktuk because they can’t even afford to rent a room.

Kampanart’s mother left him when he was three, leaving Rungroj, 62, alone with their only child. Rungroj provides a tuktuk service in downtown Hat Yai, but he earns only Bt100200 a day, a sum that has to be divided up for daily expenses as well as education fees for Kampanart. That leaves them with no choice but to use the tuktuk for shelter. Daily life for the Tipparats starts with the son having to wake up early to act as an assistant to monks from Mahattamangkalaram Temple in their morning alms walk. After the round, the monks share their food with the boy and sometimes give him money. When the boy goes to school, his father drives the vehicle around to find passengers. Rungroj picks Kampanart up at school at around 45pm and then makes another round in the evening to find potential passengers. They earn extra money from Wednesday to Sunday when there is a night market and vendors hire him to transport their goods. But the work finishes late at night, meaning Kampanart has little time to do his homework and rest.

“My son and I have taken shelter in my rented tuktuk for about four months, because I cannot afford to rent a room. I can earn about Bt300 a day from driving the tuktuk but have to pay Bt120 to rent it. Sometimes I have to spend all the leftover money to fix the vehicle,” Rungroj said.

The father said he was sorry that his son had to live in the tuktuk and had no opportunity to play like other children. “Sometimes, my son is disappointed as I have no money to buy him new clothes or toys. However, I will fight with all my best efforts so that he can continue his studies,” he said. Rungroj said the thing he most wanted now was a proper roof over their heads.

Although Kampanart said he felt troubled that he had to live in a tuktuk, he will try to endure.

“I wish I could become a policeman. What I want for the National Children’s Day is a bicycle and a Superman costume. I will study hard so that I can take care of my father,” the boy said.

A Malaysian monk at Mahattamangkalaram Temple said Kampanart helped the monks almost every day before he went to school in exchange for food. “He is a good boy,” the monk said.