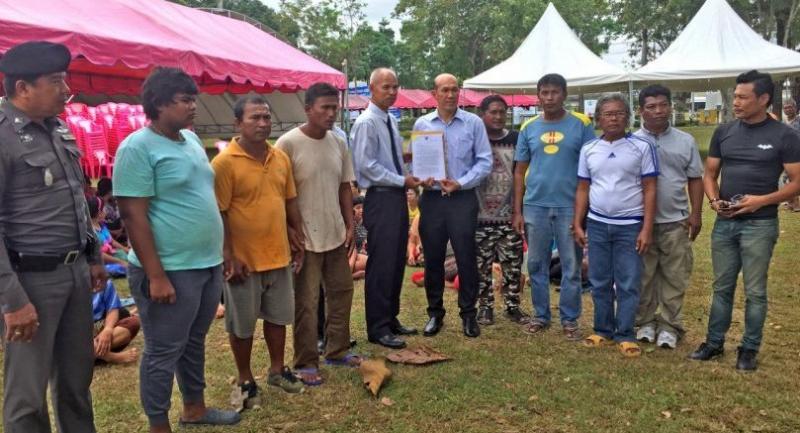 RAWAI SEA gypsies asked for justice over a case in which six of their members were arrested on allegations of illegal fishing in a national park and called for full implementation of the government’s policy allowing the sea gypsies to use the resources from national parks.

The group of sea gypsies from Phuket’s Rawai Beach, led by Rawai’s Mayor Arun Solos, submitted a petition to the Phuket Governor yesterday requesting authorities to drop the charges against six of their members who were arrested by officers of Sirinath Marine National Park.

Earlier on Monday, six gypsy fishermen were arrested by national park officers while anchored at Nai Thon Beach, which is in Sirinath Marine National Park’ area. The fishermen claimed that they just stopped at the beach to let one of their companions get relief from decompression syndrome after their deep dive fishing in the waters of Phang Nga’s Kuraburi District.

Arun emphasised that all six of the fishermen insisted that they did not fish in the national park area, as the park officers have alleged, and had explained to the officers the reason why they were anchored inside the national park. The officers still apprehended all six fishermen.

“We would like to ask for justice, because not only did they not do anything wrong, but the litigation against these poor fishermen will disrupt their lives and they will have to find large amounts of money to get bail,” Arun said.

Niran Yangpan, another sea gypsy community leader, said the fishermen did not intend to damage the ecosystem or break the law. In fact, the sea gypsies were allowed by Cabinet resolution to legally fish for subsistence living inside national parks. Moreover, they used only traditional fishing equipment and take only a few fish for their family.

“We want clarity in the implementation of this exemption, because the sea gypsies often face the problem that the officers do not recognise the allowance,” Niran said. “We do not want any problem with the authorities and [want to] live peacefully.”

However, Sirinath Marine National Park chief Witoon Detpramuanphon had a different version of what took place. The national park officers found the sea gypsies fishing in the restricted area of the national park and possessed a large variety of aquatic animals, he said. That was harmful to the ecosystem and illegal, Witoon said. Also, he cited a doctor’s opinion that one of the arrested fishermen did not really suffer from decompression syndrome, as they claimed.

“We recognise the fishing allowance for sea gypsies as per the Cabinet resolution of June 2, 2010, but this does not mean that they can fish anywhere in the park. We have restricted areas on the water within 500 metres of the shore, which is spared for tourism purpose and preserving the coral reefs,” Witoon said.

“We also found that these fishermen had also fished 22 species of aquatic animals, including sea cucumbers and parrotfish, which are vital animals that help keep the coral reef ecosystem healthy. So we have to arrest them, as their action was clearly a violation of law.”

After receiving the petition from the sea gypsies, Deputy Phuket Governor Sanit Sriwihok said the province would comprehensively investigate this issue and will ask the related agencies for details regarding the 2010 Cabinet resolution.