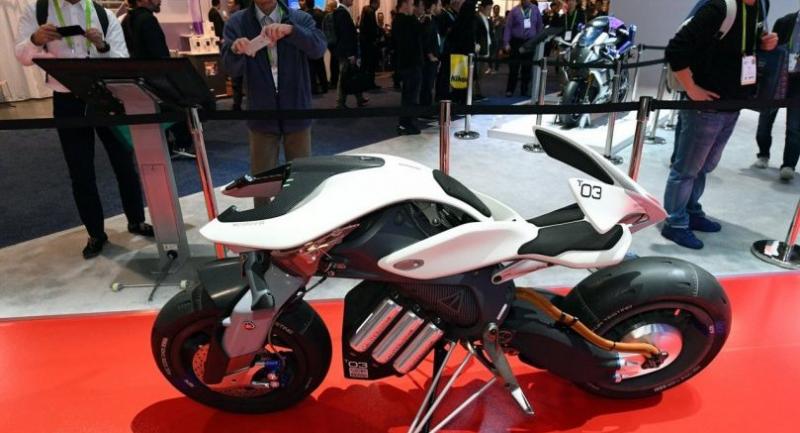 The Yamaha MOTOROiD concept motorcycle is displayed at the Yamaha booth during CES 2018 at the Las Vegas Convention Center on January 11, 2018 in Las Vegas, Nevada./AFP

With a wave, Kinji Asamura summoned a riderless motorcycle to his side in the Yamaha booth at the Consumer Electronics Show in Las Vegas this week.

The concept electric motorcycle, called 'Motoroid,' then balanced in position, holding its place even when Asamura tried gently to push it over.

Nearby, a robot that might seem suited for a futuristic action film was astride a production model Yamaha super-bike that it had ridden at speeds topping 200 kilometers per hour on a test track.

"The motor bike is the recent past, and the Motoroid is the future," Yamaha spokesman John Boreland told AFP as he glanced from one two-wheeled creation to the other.

"The object is to see what lessons can be learned to connect machine to human more effectively."

The robot-ridden Yamaha motorcycle, called 'Motobot,' is fast but blind, relying on pre-programmed routes, according to Yamaha.

Lessons learned so far from the research model include that "human beings react a hell of a lot quicker," according to Boreland,

Flesh-and-blood riders have also proven better at grasping the courter-intuitive notion of counter-steering and leaning through turns, he added.

The Motoroid model boasted autonomous features such as balancing on its own, recognizing riders, and being summoned with a wave.

Wings on the back of the seat were designed with the help of a psychologist to gently squeeze a rider's lower back in a sort of reassuring caress at potentially perilous high speeds, Boreland said.

"Somewhere along the line, this will all meld together so you'll be part of the bike and it will figure things out for you," Boreland said of insights and advances resulting from the concept motorcycles, which are not for sale.