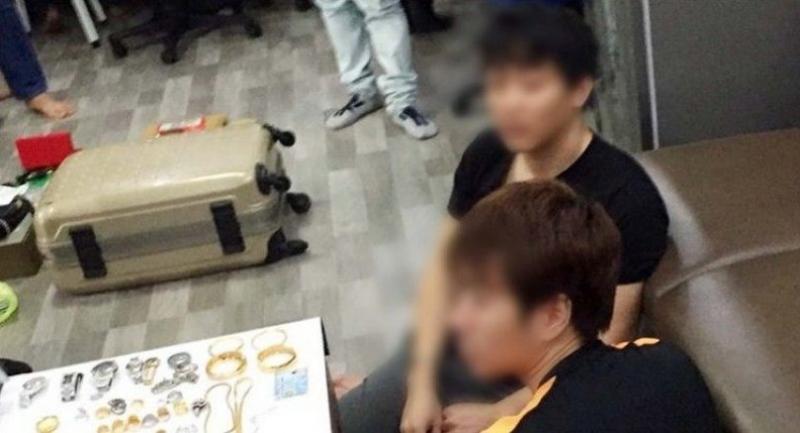 Police have arrested two Thai men in their late 20s for allegedly breaking into seven homes to steal valuables worth Bt4 million over a four-month period before and during the New Year holidays. Police officers also seized evidence including 78 stolen valuable items worth Bt3 million. The rest of the stolen items reportedly had already been sold by the suspects.

The arrest was made after home-owner Amnat Phokhaisawan, 64, and his neighbour Warisara Yimlertlak, 41, lodged police complaints that their houses, located in the same housing estate in Bangkok’s Bang Khae district, were burgled during the New Year period as both families had gone out for New Year celebrations. They claimed that the burglars had taken away valuables worth Bt1.3 million in total.

The area’s CCTV footage had captured images of the suspects and police linked the case to previous other burglaries in the four-month period ahead of the New Year’s day theft.

The investigation identified Peerapan and Wisanu, both close friends and engineering graduates from a Thai university, as the suspects. They had worked together in a transport service business, which later faced financial problems resulting in them being sued for bounced cheques.

Police said the two men had confessed to having allegedly broken into seven people’s homes to steal valuables worth Bt4 million in total to cover their expenses since September last year. They said they had sold some of the stolen items online.

Explaining their modus operandi, they said they targeted houses without a security guard. They would ring the doorbell, and if the house were unoccupied they would break in, destroy any CCTV camera system, and steal valuables. But if their bell was answered, they would claim to have pressed the doorbell of the wrong house.

Boonyarit also warned people buying things online to beware of goods sold at very low prices, as they could be stolen items which could lead to the buyers facing a criminal charge of buying a stolen item.

Warisara revealed that besides the CCTV footage that incriminated the two men, the fact that they had turned on her computer notebook, which sent an alert while they were trying to sell at a Bang Khae shopping mall, also led police to them. Police retrieved the stolen computer notebook and her gold ornaments. “I couldn’t believe that they – good-looking young men driving a nice car with good education – would commit such crimes. But police had the evidence and their confession, so I understand now that we cannot judge a book by its cover,” she added.