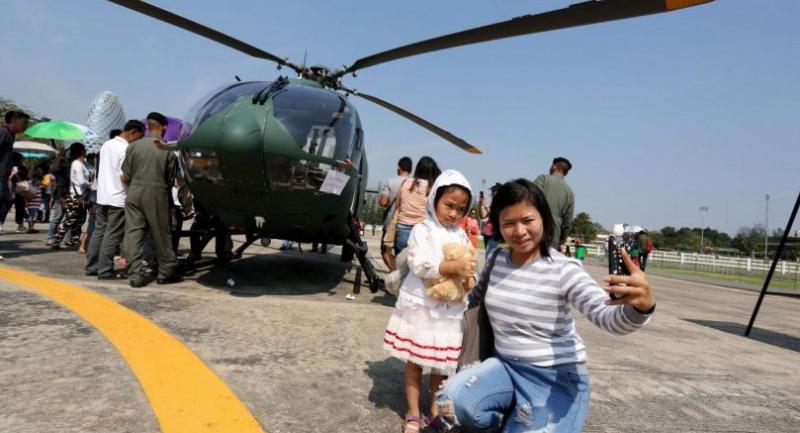 THE MILITARY yesterday opened its camps nationwide to children and displayed its arsenal as part of National Children’s Day celebrations.

Despite increased concerns expressed online about the appropriateness of exposing children to military weapons, the Royal Thai Army, Navy, Air Force, and the police yesterday put their might on display. Children were even allowed to climb into some of the tanks and take pictures with the weapons.

Army commander-in-chief General Chalermchai Sitthisart said that the Army had put on show for Children’s Day some of the modern weapons it had purchased during the past three years such as VT-4 tanks from China and new helicopters.

Chalermchai stated that the children would have the unique opportunity to see and take pictures with the newly purchased tanks even before the Army holds an official press conference on January 25 about the acquisition.

“The Army’s intention for Children’s Day events at the military bases is to provide a special opportunity for the children to gather new interesting knowledge about the military and inspire them to join the Armed Forces in the future,” he said.

“We also would like to promote a strong relationship within the family, as the parents and children can spend quality time together during the Children Day’s event in the military camps.”

It was reported that at the main venue for Army’s Children Day’s event at King’s Guard, 2nd Cavalry Division in Bangkok, many military weapons were on display. Children were allowed to freely climb and closely inspect weapons such as Blackhawk helicopters, MI 17 helicopters, EC145 Artillery, and BTR – 3E1 armoured personnel carriers.

Air Force Commander-in-Chief Air Chief Marshal Jom Rungsawang stated that air shows were held at major Air Force bases across the country. The highlight was the F-16 fighter aircraft show at Don Muang Air Force Base in Bangkok and the Gripen fighter show at the Surat Thani base.

The Navy also welcomed the young visitors onboard its battleships and allowed them to explore around. At the 2nd Royal Thai Navy headquarters, the children were welcomed to travel on the battleships to the open sea around Koh Nu and Koh Maeo Islands off the coast of Songkhla province.

Many people, however, raised concerns on social media about the appropriateness of letting innocent children get close to and play with the military weapons, as it could encourage violence and a military tradition in the young generation.

Prominent activist Pipob Udomittipong posted in his Facebook page that Thailand and North Korea were the only two countries that still displayed military arsenal on Children’s Day. He questioned the wisdom of this tradition.

Numerous children, accompanied by their parents, also visited Government House on the occasion of Children’s Day. Some were seen clearly enjoying posing for photos with cardboard cutouts of Prime Minister General Prayut Chan-o-cha, also known as “Uncle Tu” to children. The life-sized cutouts of Prayut were put up at several corners of the Government House compound.

However, two cardboard cutouts of Prayut riding a motorcycle without wearing a helmet were removed from the compound after being criticised as setting a bad example for children.