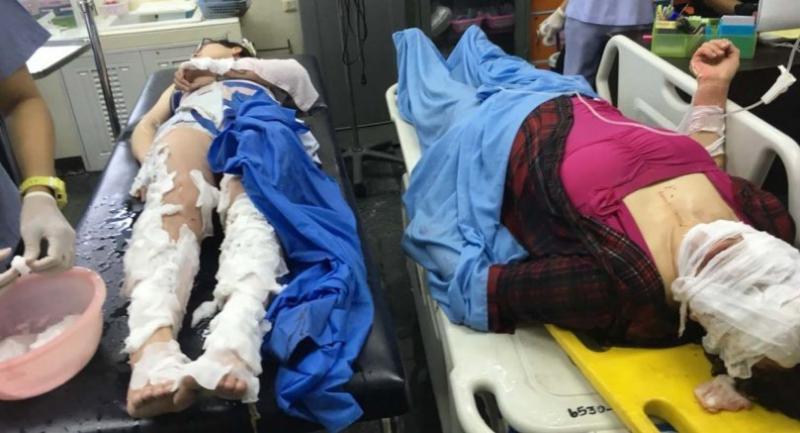 A CREW member of the speedboat that exploded on Sunday while heading from Phuket to Koh Phi Phi, resulting in 16 injuries, has been charged with recklessness causing injuries, Royal Thai Police deputy spokesman Pol Colonel Krissana Pattanacharoen told a press conference in Bangkok on Monday.

Twenty-six Chinese tourists and five Thai crew members were on the “King Poseidon 959” speedboat chartered by Apple Tour, which left from a private pier in Phuket’s Muang district and was headed to Phi Phi Island when it exploded in front of the so-called “Viking Cave” attraction. Police investigators were gathering evidence to determine whether to prosecute anyone else, particularly the boat’s captain who was being investigated for his role in the incident, Krissana said.

There were no further details about the accused crew member’s actions in relation to the accident.

The boat’s licence was also checked but it had been found to have been properly registered, Krissana added.

As a fuel leak was initially identified as the probable cause of the accident, officials from the Krabi Harbour Office On Monday joined forensic police and relevant officials to inspect the scene. They found the sunken burned hull of the speedboat stuck amid rocks along with the boat’s three engines and towed the remains to Phi Phi Beach for a detailed inspection.

Police officers On Monday were waiting to talk to boat captain Kriengkrai Boonsri, 28, who was being treated in a Krabi |Hospital’s intensive care unit (ICU). Kriengkrai was among six |people who were still in hospital due to serious injuries. He said the private pier had not kept records of passengers’ number and names, as public piers are required to do, posing difficulties for authorities seeking to provide assistance to the victims. He also assigned officials to check on all private piers’ safety measures.

Norapat said Phuket would also introduce a programme to keep online records of boats, departures and arrivals, and passenger names so assistance could be provided in a timely manner in cases of emergency.

Norapat also led officials to inspect the private pier in question and visit wounded tourist Kwang Pei Hong, 26, who will be kept at Vachira Phuket Hospital for at least two weeks after suffering serious burns.

Charoen Kaewyodla, an adviser to Thai Morning Sun Co, which owned the speedboat, said the firm was sorry for what had happened and would take care of the injured tourists, who were covered by insurance policies.

The speedboat damage was estimated at Bt3 million.