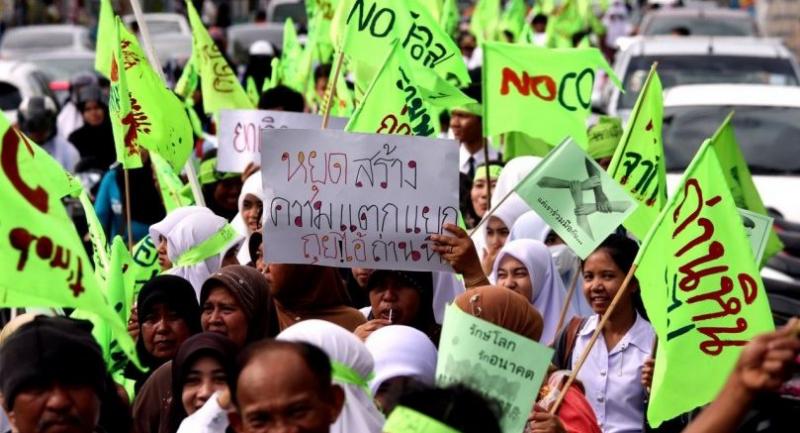 THERE ARE still no plans to cancel the Krabi and Thepa coal-fired power plant projects, the Electricity Generating Authority (Egat) has stated, while it was confirmed that there would also be new coal or gas-powered plants in the Eastern Economic Corridor (EEC) special economic zone.

An executive source at Egat, who asked to remain unnamed, yesterday dismissed news that the government would abandon plans to build coal-fired power plants in the South and replace them with new power plant projects in EEC provinces.

The source added that the South needed new “firm” large power plants as power stability in the region was at risk.

However, the source also confirmed that there were plans to build new power plants in the EEC special economic zone.

Speculation that the Krabi and Thepa projects would be cancelled stemmed from earlier remarks by Energy Minister Siri Jirapongphan, who stated that new power plants did not have to be built in the South or use coal as fuel.

Siri also suggested that the sites for new power plants should be in the EEC special economic zone in Chon Buri, Rayong and Chachoengsao, as private energy companies in the EEC could join bidding along with Egat to develop new plants.

Siri said that plan was one of the changes in the new Power Development Plan (PDP) 2018, which was being drafting and expected to be completed in March, to promote competition in the energy market that would drive down prices.

The Egat source said his agency had not received any official notice about new adjustments in the PDP 2018 from the Energy Ministry, which had not issued a specific order to Egat about the Krabi and Thepa projects.

The ministry had only asked the agency to reconsider power plant construction plans for the South, according to the source.

“It is ridiculous to build the new power plants in the Eastern region to secure power stability in the South, because the electricity would have to be transmitted via a power line past the geographical bottleneck in Prachuap Khiri Khan. If the power line became damaged, the entire Southern region would face a power crisis,” the source said.

“The Central and Eastern regions do not need new power plants right now, because the electricity reserve margins in these regions are enough for industrial development in the EEC special economic zone.”

However, independent energy expert Prasart Meetam said energy authorities’ greatest problems – their inability to adapt to advancing technology and lack of transparency regarding impacts to people and the environment – would persist regardless of where the new plants are built.

“I do not agree with the construction of new fossil-fuel power plants no matter where the location is, because various studies prove that renewable energy will be cheaper and more advanced and replace fossil fuel as the main source of power in the future,” Prasart said.

“The latest report of International Renewable Energy Agency, which was published last Saturday, also indicates that the cost of electricity from every kind of renewable energy will be cheaper than any fossil fuels by 2022.”

He said the debate over the use of coal or natural gas as fuel and the location of new fossil-fuel power plants proved that official energy agencies had failed to keep up with constantly improving technology.

He also urged authorities to overcome any “hidden interests” with the fossil-fuel industry and promote renewable energy.