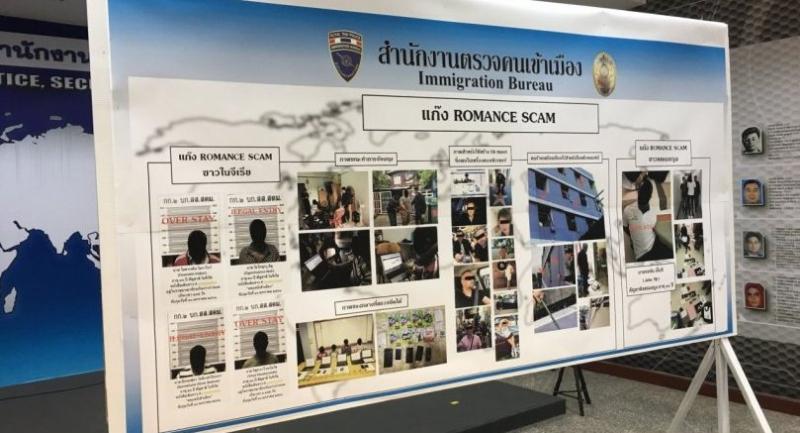 Immigration police have arrested four Nigerians and a Cameroonian and charged them with operating a romance scam to deceive Thai women into wiring them money.

The four accused Nigerians were identified as Ikemefuna Oliver Ibekwe, 26, Ogochukwu Iduh, 28, Osaratin Irabor, 36, and Vitus Nwokemodo, 31 and the Cameroonian as John Nji.

The arrest came after police received complaints from several Thai women, said Immigration Police Bureau commissioner Pol Lt-General Sutthipong Wongpin at a press conference on Friday. The women reported that foreigners they knew had been unlawfully detained at airports on their way to visit the women.

Police checked and found no such foreigners and realised that the women had been deceived. An investigation discovered the location of the alleged gangsters and police raided an apartment on Soi Lardprao 134 in Bangkok’s Bang Kapi district on January 10.

Sutthipong said several of the men fled by using ropes to lower themselves from the balcony of the apartment building. The suspects had prepared ropes in case police raided their room, Sutthipong said.

A check of the computers revealed connections to the Cameroonian and police arrested him at a condominium in Nonthaburi’s Pakkret district on January 15. Police also confiscated two notebook computers, nine mobile phones, two ATM cards and a bankbook from him.

The five denied any wrongdoing.

Sutthipong said police have strong evidence against them from computer chat logs.