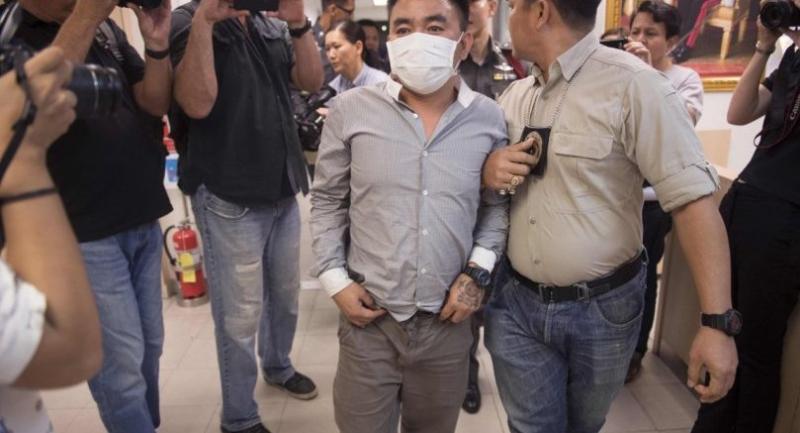 Boonchai Bach (C), 40, a Vietnamese national with Thai citizenship and alleged kingpin in Asia's illegal trade in endangered species, is escorted past journalists as he is processed at a police station in Bangkok on January 20, 2018. /AFP

Boonchai Bach, 40, a Vietnamese national with Thai citizenship, was arrested on Friday evening over the smuggling of 14 rhino horns worth around $1 million from Africa to Thailand.

His downfall follows the December 12 arrest of Nikorn Wongprachan, a Thai National Parks and Wildlife Conservation official, at Bangkok's main airport as he attempted to smuggle the rhino horn from the quarantine section to a nearby apartment.

The horn was smuggled into Bangkok by a Chinese man who was arrested a day before on arrival from Johannesburg, South Africa.

The police sting led to Boonchai, who financed the network.

"This is a major smuggling syndicate and Boonchai is a ringleader," General Chalermkiat Srivorakan, deputy national police chief, told reporters Saturday after the suspect arrived at Suvarnabhumi airport ahead of his remand.

"Boonchai admitted he was involved," Chalermkiat said, adding he faces up to four years in jail for smuggling parts of protected animals.

For years Boonchai and the Bach family are believed to operated with impunity from Nakhon Phanom in northeast Thailand, bordering Laos -- linchpin players in a multi-million-dollar trade in illegal wildlife.

The town is a pivot point in Asia's wildlife trafficking chain, in part because it is the narrowest neck of land for smuggled goods to transit through Thailand, into Laos and onto Vietnam, a major market for animal parts used in traditional medicine.

The Bachs have "long run the international supply chain of illicit wildlife from Asia and Africa to major dealers in Laos, Vietnam and China," Freeland said in statement following the announcement of Boonchai's arrest.

They are believed to work alongside Vixay Keosavang, a Laotian dubbed "the Pablo Escobar of animal trafficking", who orchestrates a major wildlife trafficking ring from the Communist state, bribing officials to allow him to operate.

Laos has long been a top transit hub for smuggling wildlife products, with widespread corruption and weak law enforcement allowing the criminal activity to flourish.

China and Vietnam are among the world's biggest markets for parts from endangered or protected species including tigers, elephants, rhino and pangolins.

The traditional medicine market flourishes despite the total lack of scientific evidence as to their efficacy and government campaigns to end the trade.