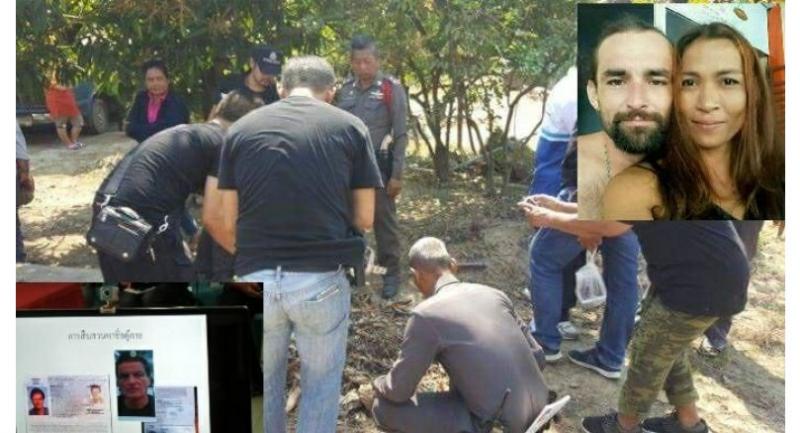 The body parts, including a leg with a tattoo similar to de Stefani’s, were found partially burned in the ashes of a bonfire of rubber tyres in a wooded area near Bung Thab Chan Pond in Tambon Laemrang.

Bung Narang Police Superintendent Pol Colonel Chaisathien Maneejak had earlier urged the 61-year-old Italian to report himself as alive following a search on Sunday of the nearby home of Rujira Eiumlamai, 38, de Stephani’s Thai ex-wife.

The search found de Stephani’s expired passport and a bloodstain on a carpet, on which police conducting DNA tests, with the results expected later in the week.

De Stephani reportedly lived at the house with Rujira for a year before he left last October.

Following a meeting of investigators, Phichit police chief Pol Maj-General Thawatchai Muannara said police had concluded the body belonged to de Stefani and identified Rujira and her French boyfriend, who was unidentified, as murder suspects.

Both are believed to have fled in a Toyota Yaris sedan with the licence plate number Kor Khor 1374 Samut Songkhram.

Police also found a note reportedly written by de Stefani, condemning an unspecified “most evil” woman who had said she loved him to get his money.

Authorities said they suspected a love triangle and an argument over money might have resulted in de Stefani’s murder.

The French suspect reportedly had previously been blacklisted from entering Thailand but had returned by crossing illegally at the Thai-Lao border.