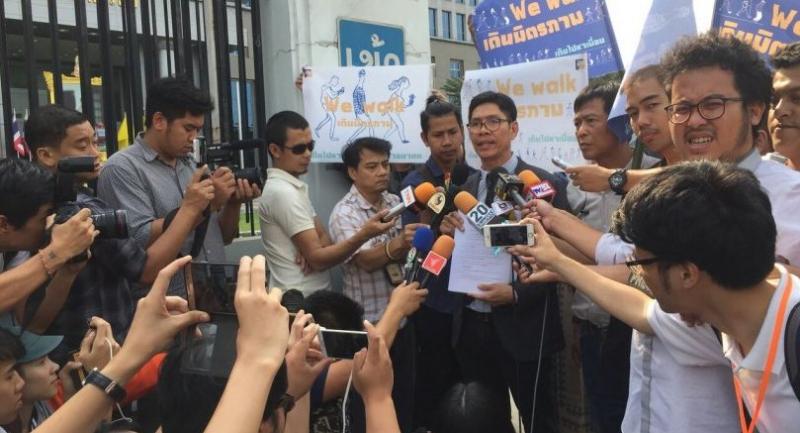 THE LEGAL team representing the People GO Network are suing the Royal Thai Police and three high-ranking policemen for allegedly disrupting and intimidating the “We Walk” peaceful demonstration and violating people’s right to gather in public.

After sending the complaint to the Administrative Court yesterday, E-Law Foundation lawyer Surachai Trongngam said the suit accused police of violating public-assembly rights and asked the court to order that police cease operations that limited the right to demonstrate peacefully.

The suit also asks the court to order police to facilitate the protesters’ long march and to pay them Bt100,000 as compensation for previous rights violations.

The People GO Network, an umbrella group of 97 public organisations, launched the 450-kilometre-long march from Bangkok to Khon Kaen last Saturday in a campaign drawing attention to the need for state welfare, universal healthcare, food security, freedom of expression, human rights and a just society for all.

However, from the very first hours of their march, participants faced interference as police and military officers tried to stop the march by labelling the walk as a political protest prohibited by order 3/2558 of the National Council for Peace and Order (NCPO).

Surachai said the operation to suppress and intimidate protesters during the first two days of the “We Walk” march were in clear violation of their right to stage a peaceful protest, which is guaranteed by the current Constitution.

“We had already notified the local police last Friday of the demonstration and that we would follow the procedures under the Public Assembly Act. We assured the police that our protest is not a ‘political protest’, but when we started our long march on Saturday, the group faced several actions from the police to stop the protest,” he said.

“I confirm that this activity does not violate NCPO order 3/2558.”

Nimit said that despite the heavy interference by the officers, the group was determined to walk to Khon Kaen to highlight the severe problems of human rights violations under the military-led regime, regardless of whether officers tried to abduct the march participants.

“Right now we walk in groups of four people to deter authorities’ actions,” Nimit said. “Our long journey is full of uncertainty as the officers threaten anyone who tries to help us. We do not even know where we will sleep tonight and whether we can continue our march tomorrow.”