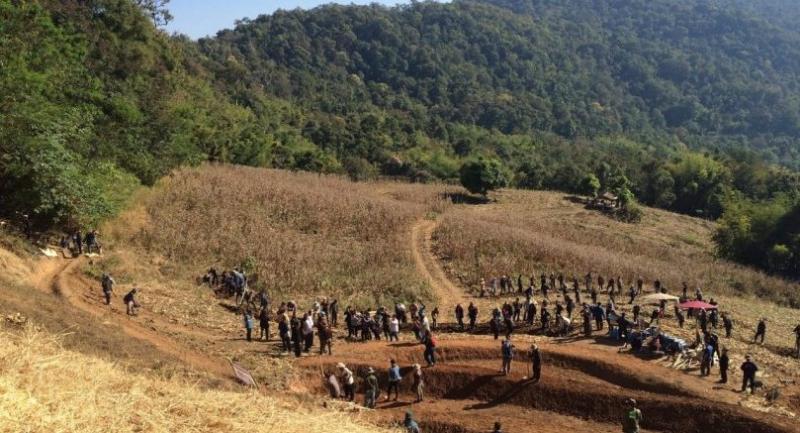 One hoe after another hit the earth time and time again before long lines of a metre-long channel began to take shape on a plot of land that had been turned into a cornfield.

Just like several other hilly plots in Tambon Srisaket in Nan’s Na Noi district, the land was once a pristine forest but had more recently been cleared to pave the way for the cultivation of maize, and was tilled until it was almost beyond repair.

The land is dry and the soil so hard that a hoe can only dig into it inch by inch, and the weather is extremely hot under a scorching sun.

A further complication is that the land sits on overlapping territory claimed by both Sri Nan National Park and the villagers in the tambon, resulting in hesitation and uncertainty over the right to use the land.

Yet, without any light at the end of the tunnel, the country’s self-sufficiency lead applicator Wiwat Salyakamthorn, now also a deputy agriculture minister, came up with an experiment to introduce a new way of living on such controversial plots. The aim is to try to revitalise the land so that trees can grow at the same time as a more sustainable and non-destructive way of agricultural life begins.

“Ao Job Mue Rak” – or “The First Hit of a Hoe” – is the new project under which Wiwat is attempting to introduce a self-sufficiency lifestyle to the maize growers in Nan, one of the Kingdom’s 13 most-destroyed-watershed provinces, so that livelihoods and the land can both be given a chance to revive.

“Frankly speaking, they’re not wrong [to want to grow maize],” said Wiwat. “The villagers have had to grow maize following global trends. But they were convinced that maize would bring them attractive incomes, without realising that they would instead incur debts and poverty. So, we need to introduce a new approach to living. One hoe can help each of them to bring about a new lease of life.”

The heavy deforestation in high-topography watershed areas, with Nan being one of the target areas, was first addressed by the junta government in the middle of last year.

According to a Cabinet resolution in July, it was reported that up to 8.6 million rai (1.27 million hectares) of high-mountain watershed areas in 13 provinces had been heavily cleared, with 800,000 encroachers involved.

Almost half of the land was reportedly used to grow maize, and the reported damage mounted to Bt469 billion.

Realising the seriousness of the situation, the government instructed the Agricultural and Cooperatives Ministry and the Natural Resources and Environment Ministry to join forces to tackle the problem.

The first “Integrated Strategy for Degraded Watersheds on High Topography” was developed and put in place to guide the concerned agencies, under the concept of increasing green areas on degraded watersheds in a sustainable way.

The strategy came with four prime goals. Besides reforesting the 8.6 million rai of degraded watersheds within 20 years, it aims to reduce losses to people’s livelihoods and properties.

It also aims to boost the qualify of life of high-grounders in a sustainable way, while boosting their awareness and participation in forest preservation at the same time.

Wiwat’s experiment is among the models being explored before concluding and drafting a master plan for implementation.

Channels would be dug on the land first, so that they help receive and retain rainwater in the soil, making it moist enough to support the regeneration of trees and crops.

Fields would be shaped accordingly, and the crops would be more selective and truly sustain life, such as rice for the villagers’ own consumption without them having to buy it any more.

The “three forests with four benefits” principle would then be introduced to help overhaul the whole ecosystem.

“I just wish that we can have a model that people see as helpful and help introduce it elsewhere. Change cannot happen if people are simply forced to change their ways,” Wiwat said.

Songtam Suksawang, director of the National Parks, Wildlife and Plant Conservation Department’s National Parks Office, said Wiwat’s pilot project is complementary to what other agencies, including his own, have been doing.

New management of land use is seen as being as critical as property-rights management, Songtam said, adding that Wiwat’s model will suggest the way forward when currently pending regulations and laws are implemented.

Besides the strategy, Songtam said concerned parties, including the natural resources and environment reform committee that he also works for, were currently developing and putting in place more accommodating laws to support the problem-solving efforts.

Some old laws seen as obstructing the efforts, including the aged National Parks Act, are being amended, alongside the introduction of a new bill on forest communities, the director explained.

Further development of legal tools to support land-use management in such problematic areas is also being considered to reinforce the efforts, he said.

Kaset Yosboonruang, 60-year-old kamnan of Tambon Srisaket, stood on a hill and looked down to the land plot, where channels and reshaped fields were taking shape, before murmuring, “I’m not sure it can help.”

He has not lost hope, however, pointing across the plot in the valley below to another hill, where trees cover the hillside.

It was once a cornfield like this, he said, but trees regenerated and were back on the cleared land following talks and agreements with the forest officials of the park to settle the overlapping-territory issue.

For the rest of the controversial plots in the tambon, up to 10,000 rai in total, including the one below where he was standing, Kaset conceded that a similar ending was still a long way off, but he just hoped that concerned officials helped make things clear in regard to permission to use the land, which was something still seen by the villagers as inconsistent.

What they sought, he stressed, was more choices for utilising the land and getting themselves out of debt and poverty, which were the biggest burdens that should be considered along with the present challenges.

“The project looks good, but will it be here for long? Policies, projects, governments, come and then go. We just desperately need continuity and seriousness among all of them,” said the tambon chief.