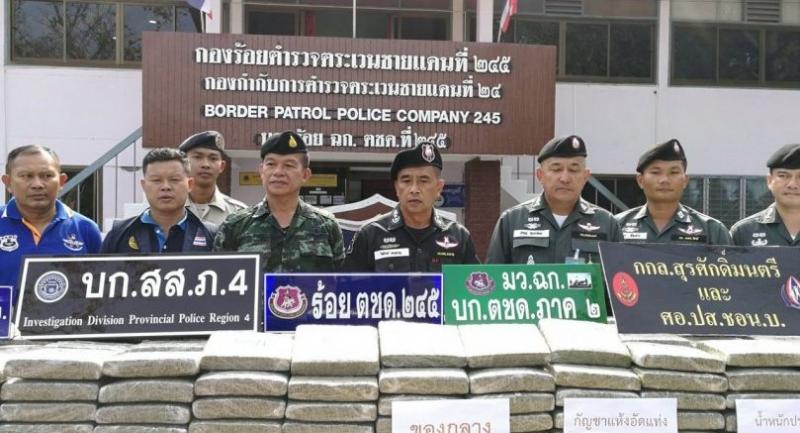 Three suspects were arrested in the Northeast on Saturday allegedly while on their way to deliver 600 kilograms of marijuana. The illicit drugs could have fetched about Bt20 million in markets overseas.

The suspects told police that they had been paid Bt30,000 each for the delivery by a man known only as “Dam”. They said they had smuggled drugs four times before their arrest on Saturday.

“We did nothing except driving the vehicles prepared for us,” Wises said. “We were supposed to deliver the drugs to a location in Sara Buri province.”

Border Patrol Police Region 2 commander Pol Maj-General Pairoj Thantham said on Sunday that his agency had coordinated with various relevant agencies in cracking down on the drug traffickers.

“We had received a tip off that the illicit drugs would be transported from an area bordering Nong Khai and Udon Thani. After we surveyed the area, we noticed three suspicious vehicles,” he said.

The team followed the vehicles from Nong Khai’s Sangkhom district to Nong Bua Lamphu’s Na Klang district before they stopped two of the suspicious vehicles, both of which were Mitsubishi Pajeros. The other – an Isuzu D-max - managed to escape.

Six hundred bars of marijuana, each weighing about one kilogram, were found in the two vehicles.