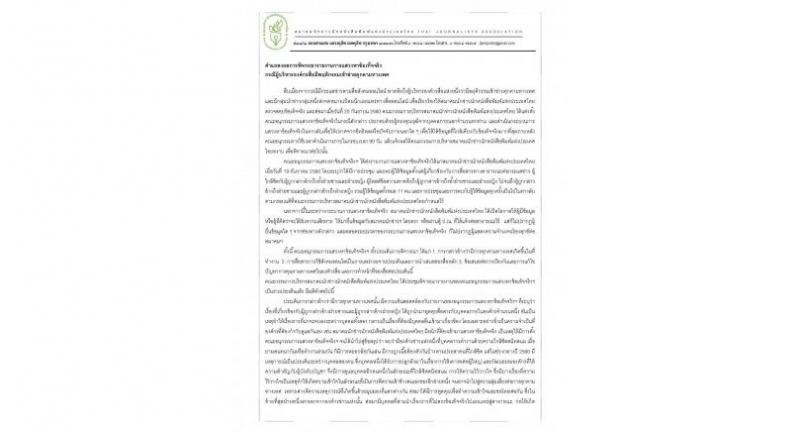 A close relationship and trust in the workplace were the key factors that had led to “misunderstanding” and a “sexual harassment-prone situation”, the Thai Journalists Association has concluded in regard to a case of alleged sexual harassment at a media organisation.

The TJA released its fact-finding results in the case on Monday, without naming anyone involved or pinpointing whether the alleged act had actually taken place.

The association said its press release was based on the findings of its independent fact-finding panel, which was appointed last September to investigate the matter.

A director of the unnamed media organisation was accused in the middle of last year of having sexually harassed a colleague in the workplace.

The news was then circulated on social media, during which the male executive was strongly criticised, leading to the investigation by the TJA.

The TJA’s panel talked in secret with 11 persons, including the alleged harassment victim and the accused.

It learned that they were close and had trust in one another, to the point that the relationship may have led to a “misunderstanding” and a “sexual harassment-prone situation”.

This was partly due to a person having been raised in a way that respected older persons and seniority, the TJA noted in its press release.

The two later talked and apologised to one another, the association said.

The victim of the alleged harassment then quit her job, before the news broke with a third party disseminating “distorted facts” on social media and affecting their reputations.

The findings will be forwarded to other media organisations for discussion and to find better ways to deal with sexual-harassment cases, as well as developing and putting in place new codes of conduct in regard to workplace relationships in media outlets, according to the TJA.

Human Rights Commissioner Angkhana Neelapaijit posted on her Facebook page, expressing her disappointment at the association’s conclusions and saying that the results released contained words that insulted and disrespected women.

It had apparently downplayed severe issues, turning them into minor ones, she said.

Worse still, the recommendations proposed for addressing the problem meant people were to have confidence in self-regulating measures, Angkhana added.