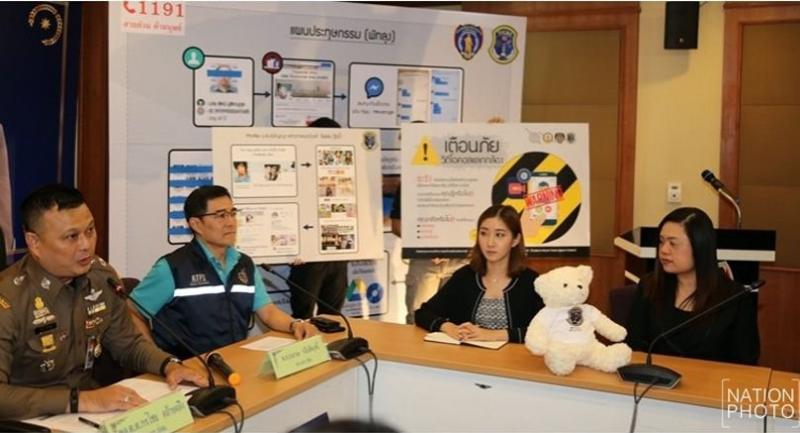 Two men have been arrested for allegedly luring at least 31 boys aged between 13 and 18 to perform lewd acts on social media, which were recorded as video and sold or exchanged in a secret chat group, Anti-Trafficking in Persons Division (ATPD) chief Pol Maj-General Kornchai Klayklueng announced at a Bangkok press conference on Wednesday.

Five victims have filed formal complaints against the suspects.

Freelance casting director Paveen Buppanhakul, 31, was arrested on December 24 at a condominium in Bangkok’s Sathorn district allegedly in possession of child pornography.

A university employee Lak Musiknukul, 41, was also arrested at his home in Phatthalung on January 16.

The investigation by the Thailand Internet Crimes Against Children (TICAC) team found that Paveen allegedly had opened a Facebook account under the name “Jik Nichaporn Likhidwong” with a profile photo of 26-year-old former singer and internet celebrity Ananya “Goodiie” Saowaparkmaneewong as a teenager.

Paveen also continued to blackmail victims to perform lewd attacks until some told their parents, resulting in the complaints, police said.

Paveen was also accused of molesting boys at his apartment based on footage from a hidden camera in his room.

After Paveen’s arrest, police determined that he had sold clips to another Facebook user under the name “Belle Arunmanee Jirakunladilok”, who turned out to be Lak.

Lak said that he had carried out such behaviour since 2011 when he got the idea from a homosexual web board.

He was initially charged with possessing and distributing child pornography in violation of the Child Protection Act and Computer Act.