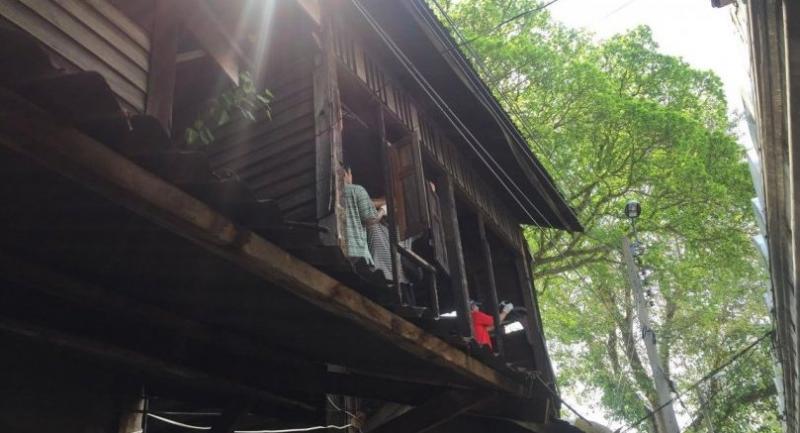 DISPUTES and uncertainty remain unavoidable for both the current and former dwellers of the Mahakan Fort community in Bangkok’s old town, but in the end they have pledged to preserve their heritage with all their strength.

The number of antique wooden houses in one of the most important historic communities of Bangkok has been steadily declining in recent months, with the latest two houses demolished last Monday.

Bangkok Metropolitan Administration (BMA) has insisted that all the 19th century houses will have to be removed. Eight houses will be built as replicas, using some original materials, but all residents of the community will have to leave. Somphon Pannoi, a senior member of Mahakan Fort community, said only 14 families now lived in this old community. They were uncertain about their future and felt under great stress because of the presence of BMA officials and military officers in the area.

“We feel betrayed by the BMA, because they promised in the four-parties agreement [signed among stakeholders last year] that they would keep 18 houses and let us continue living here,” Somphon, 76, said.

“We feel insecure and stressed, as the soldiers often visit our homes and try to persuade us to leave. The soldiers have been stationed in our community since November and we do not feel good about it.”

Officers from Bangkok’s Internal Security Operations Command (Isoc) have been in the community since last November, officially under an operation to suppress the illegal sale of fireworks and drugs.

After the latest demolition last Monday, only 16 houses are left.

These are last remaining remnants of a community that is more than 200 years old. Both its senior residents and top historians have confirmed that the community has always been a bustling residential and commercial area since the capital’s early days.

“Although I was not born and raised here, I live here now and have spent half of my life here,” Somphon said. “This is my home and my identity, and I insist on fighting to win the right to live in my home.”

However, BMA’s City Planning Department director Sakchai Boonma insisted that the plan for Mahakan Fort community was final, and the community would have to disband. No one would be allowed to live in the new Mahakan Fort Park, he said.

“BMA has made the decision to remove all the houses, except for eight preserved houses, to create the park. However, those eight houses will also have to be dismantled and rebuilt with the same material, techniques and style, because these houses are very old and dangerous,” Sakchai said.

He insisted that all the remaining residents of the community would have to move away by this April in order to open room for construction of the new park and renovation of Mahakan Fort. The BMA has already received a budget of Bt40 million to renovate the old city wall and fort.

“The park construction and Mahakan Fort and city wall renovation are scheduled to be complete within three years, and then the City Planning Department will hand over the park and the fort to be under the responsibility of the Environment Department,” he said.

Speaking on behalf of those who had chosen to move out, Pheeraphon Hemarat, a former community leader and traditional Thai potter, said 17 families from Mahakan Fort community were now staying at a temporary shelter at the old headquarters of the Metropolitan Waterworks Authority not far from their former homes.

There were plans for them to move to a plot of land at Kiakkai neighbourhood in Dusit district, but there was no clarity about permission to lease this land from the Treasury Department, Pheeraphon said.

“Our livelihood in the temporary shelter is not bad,” he said, “but we still face some difficulties such as access to tap water. We would like to ask the BMA and Isoc not to abandon us and make sure that we will get our new homes as soon as possible.”