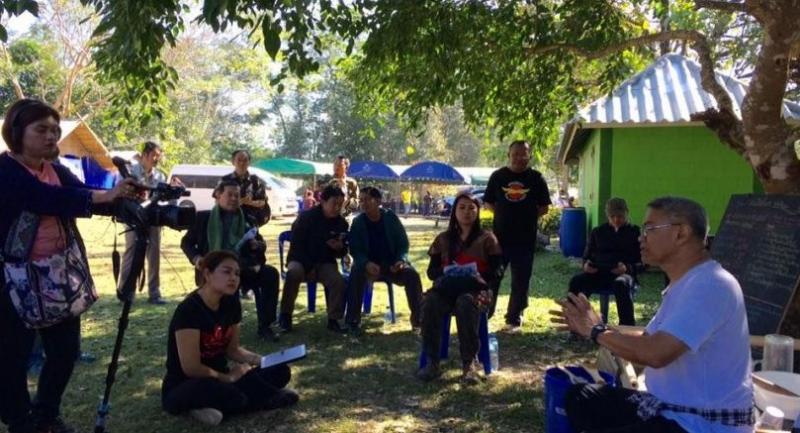 Wiwat during his recent effort to reforest deforested watersheds in Nan province.

NOTED sufficiency economy practitioner Wiwat Salayakamthorn was invited to join the fifth Prayut Cabinet as Deputy Minister of Agriculture and Cooperatives amid speculation that he, along with other ministers who have long experience working with the masses, have been invited to sit in the Cabinet to help shore up the government’s popularity.

Wiwat has dismissed the speculation, saying it had nothing to do with votes. The government, he said, just wished to see him help push forward sufficiency economy and self sufficiency.

AS PEOPLE SAW [YOU] ENTERING THE AGRICULTURE MINISTRY, THEY SAW IT AS SOMETHING TO DO WITH THE GOVERNMENT’S POPULARITY AND VOTES IN THE FUTURE. WHAT WOULD YOU SAY TO THAT?

I admit that as soon as I entered the office, there were political comments in the media, both pro and anti, but I must say that I decided to take up the offer as I saw we were in the middle of a crisis once again.

How? You may have heard about the economic cycle: like a plane, it parks and then takes off. It later flies to the sky before landing, or sometimes, nose-diving, just like what happened during the 1997 crisis.

Thailand is no different from other parts of the world. Our late His Majesty the King [Bhumibol Adulyadej] once warned us not to be too extreme, but to take the middle path and we would be able to withstand any turbulence. Unfortunately, we took another path, putting money first, despite having other special qualities including self-sufficiency.

Thailand has taken the wrong path. The US that we followed barely survived the crisis. Our late King, on the other hand, received much praise from all over the world, and his sufficiency  economy philosophy won praise and acceptance as part of the new doctrine for the world’s survival: the Sustainable Development Goals.

So, it’s a good time for us to review what went wrong and help one another out of the crisis.

IS THIS THE ASSIGNMENT YOU HAVE RECEIVED FROM THE GOVERNMENT?

I think this is a good opportunity and this government is supportive. My social networks told me that I would face very hard and exhausting work. Actually, we have been working on our belief. This government has just opened up a chance for us to steer it forward in a wide scale.

One day, the PM’s secretary just called me that he would like to invite me to join his Cabinet. I asked him what he would like me to do. And he simply told me that it was just steering what I have been doing, along with the other two ministers. I checked their work experience and was okay with them. So, I accepted the invitation.

Actually, the PM even sent some military officers to learn the way from my centre. The point is people learn things from us and can create similar centres or expand their networks. We would change people, not by power, but by knowledge and mindfulness.

We have been doing this along with some universities, but this time, the head of the government has requested this. So, I think this is a good chance.

IT’S A GOOD OPPORTUNITY, AS YOU SAID, TO EXPAND THE SUFFICIENCY PHILOSOPHY NATIONWIDE?

I think it is. When I went to a village, as Ajarn (teacher), I may be able to introduce it to five people who are interested in the idea. But as a deputy minister, there will be more influential followers than before, who are ready to take my words and practice.

With such strong support, the opportunity for us to see the idea introduced in our society would happen fast. And I personally believe that it would be introduced more widely than ever, though we cannot say to what extent it will be.

DO YOU EXPECT IT TO REPLACE MAINSTREAM DEVELOPMENT?

I would say that now we have it in our national policies. The challenge will be how we can transform the idea into practice, let’s say, in the 20-year national strategy plan. I personally believe that we could, given the global trend that needs similar changes.

Besides policies, our academic arena has adopted more of the idea and helped introduce it to people. So, I quite believe that people will see more the importance of sufficiency in the future. It may not yet replace the mainstream trend, but at least it has provided a new possibility. Bhutan, for instance, has adopted sufficiency lifestyle as its national goal. We Thai people have walked a long way along the development path, and if we are serious enough, I think we can make it, and make it our mainstream path.

It’s the way, otherwise we would be at war. Mainstream development does not distribute wealth, and that [would lead to] a war.

By saying this, it’s not that I am against the mainstream trend of capitalism. Capitalism has its bad side and good side, and we can pick the good ones and apply them to our thinking.

HOW WOULD YOU MATERIALISE THE IDEA HERE AT THE AGRICULTURE MINISTRY?

It sounds like a joke, but I think our temples, at least 40,000 temples nationwide, could be good educational centres. Our temples used to function like that before, and they can again.

To start with, I’ll work on water issues first. To be self-sufficient is to be able to stand on our own feet, and that’s the challenge: how we can preserve water in a sustainable way? Royal rain-making would be introduced nationwide to help bring water to people, while small-scale water storage would also be introduced so that people can manage water by themselves.

As I said, the challenge is how to transform the idea into practice, and the operational plans that follow are crucial.

Again, my standpoint is clear. Every political party that announces the idea as part of their policies would win my support, not just the junta government.

But nobody talked to me about helping woo votes. I think if they take the idea seriously enough, they will win praise and votes accordingly.