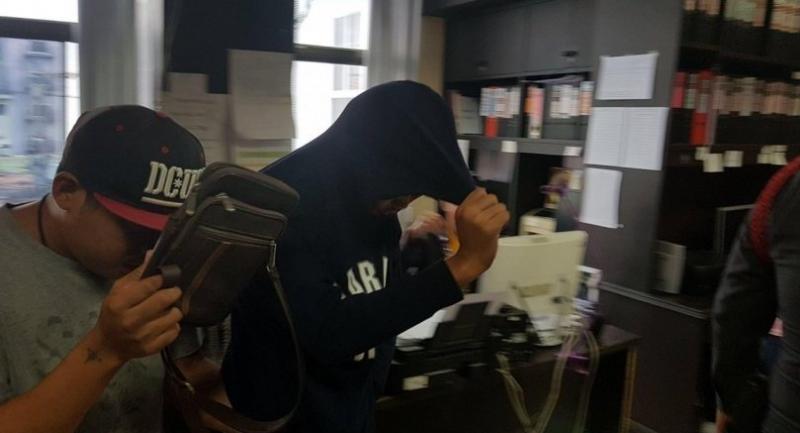 A police lance corporal in Chon Buri’s Nong Prue precinct and two civilians have surrendered to police and denied an accusation that they had abducted a 22-year-old woman from her Pattaya apartment and coerced her into having sex.

The suspects allegedly tried to extort money from the woman and two of them forced her to have sex with them in exchange for her release last Saturday. Muang Pattaya Police Station superintendent Pol Colonel Apichai Krobphetch said on Monday that the lance corporal and two other suspects had been brought to police by the Nong Prue precinct superintendent.

The three men denied the accusation of extortion and rape but admitted to being the men filmed by the apartment’s CCTV footage. Apichai said he would ask the victim to provide more information and identify the suspects before deciding what charges to file. He said he had already requested that the policeman’s supervisor dismiss him from the civil service pending the investigation.

In a police complaint filed on Sunday, the Nakhon Phanom woman, whose name was withheld, claimed two men wearing clothing similar to police uniforms had raided her apartment in Soi Bongkot of southern Pattaya City area. A male friend had gone to see her at the apartment, but he was followed by the three suspects, who said they were investigating suspected illegal activity.

The suspects then allegedly conducted a search for “illegal items” at the woman's room and demanded Bt30,000 “to clear the criminal case” involving unspecified charges. The woman and her friend were then allegedly detained at a Pattaya motel where they were threatened and told to pay the money.

The policeman left with the man, leaving the woman alone in the room with two men who claimed to be police volunteers. After she gave them Bt2,700 in cash, the two suspects allegedly coerced her into having sex with each of them in exchange for her release. Later on Monday, the victim identified the suspects and testified to police that she had no connection to drug crime - the fact in line with police's probe result, Apichai said. The three men are therefore charged for illegal detention, extortion and gang rape, he said adding that police would object their bail release when presenting them for a court-issued detention order later.