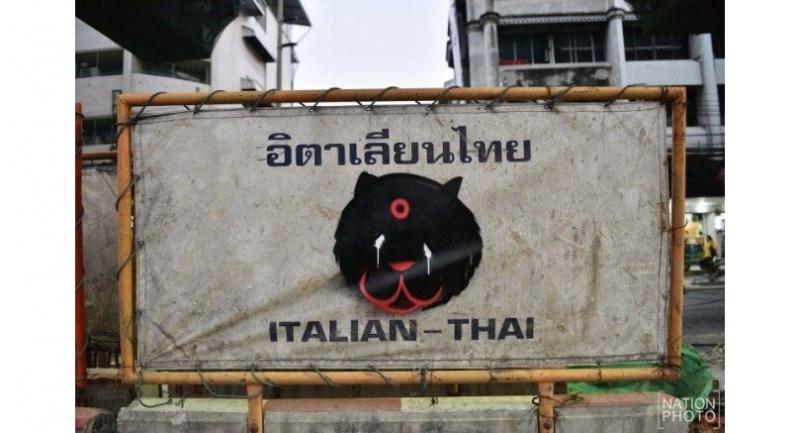 A canvas dust screen at an Italian-Thai Development Plc (ITD) construction site in Bangkok was painted with an illustration of what appeared to be a crying black leopard with a bullet hole in its head.

The protest artwork was spotted on Thursday afternoon at the company’s construction site at the mouth of Soi Phahonyothin 34, near the site of the company’s work building Sena Nikom Station in the northern expansion of the BTS Skytrain Green Line.

It is believed that an angry person or persons may have painted the image to express their anger against ITD president Premchai Karnasuta.

The leader of one of Thailand’s largest construction companies has been charged, along with three companions, for alleged illegal poaching in the Thung Yai Naresuan Wildlife Sanctuary, possession of hunting rifles – and possession of the carcass of the highly endangered black leopard and other animals.

The image was also posted on “A CALL for Animal Rights Thailand” Facebook page and received more than 4000 shares on Thursday. The post drew a lot of comments expressing people’s fury against Premchai.

ITD has built many well-known infrastructure projects, including Suvarnabhumi Airport, the BTS Skytrain system, and multiple expressway and highway projects across the country.

Social media users have launched a campaign to boycott ITD but the government said it is too early for them to consider blacklisting ITD from acquiring state contracts following the arrest of its president. The government said the issue was a personal matter.