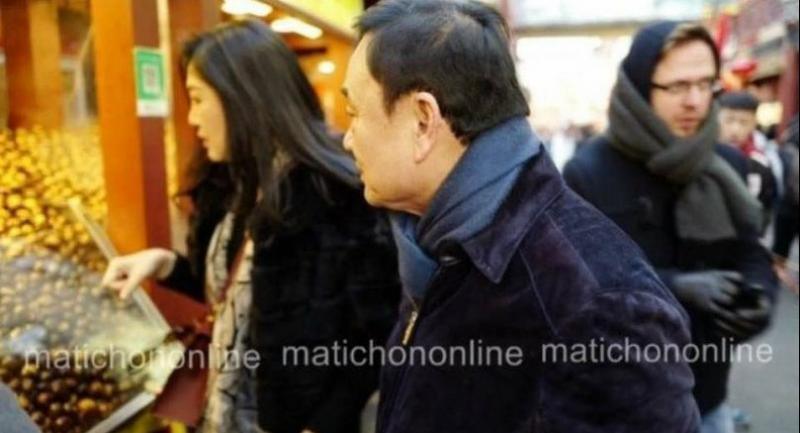 FUGITIVE former prime minister Yingluck Shinawatra has been spotted in Beijing along with her brother Thaksin, another ex-PM who is also on the run from Thai law, according to media reports.

A photograph of the duo taken while they were apparently buying chestnuts was published on Matichon Online and other media websites yesterday afternoon.

The siblings were at a mall in the Chinese capital city as the city prepares for Chinese New Year celebrations on February 16, Matichon reported.

Thaksin’s youngest daughter, Paetongtarn, posted two photos of her father on her Instagram not long after the other pictures were released on the Matichon website.

“My dad wishes all Thais a happy Chinese New Year from Beijing in advance. Although we are far away from each other, I always miss you, don’t you know?” Paetongtarn wrote on her Instagram account, @ingshin21, yesterday.

This was the third time Yingluck has been seen in public since she fled the country in late August. Photos of Yingluck, who was spotted twice in London, were published on social media late last December and early January this year.

After those photos were circulated, Thai authorities confirmed last month that the fugitive ex-premier has been in London since September and she possibly carries the passport of another country, as her four Thai passports have been revoked. But they said they did not know about Yingluck’s status in the UK or whether she had applied for political asylum or a visa to remain there.

Yingluck fled the country a few days before the Supreme Court was set to rule in August in a case against her of dereliction of duty over her government’s rice-pledging scheme. She reportedly fled to London after stopping in Dubai.

On September 27, the court sentenced her in absentia to five years in jail without suspension for malfeasance of duty.

Thai agencies have failed to locate her even though they have asked the international police agency, Interpol, to help.