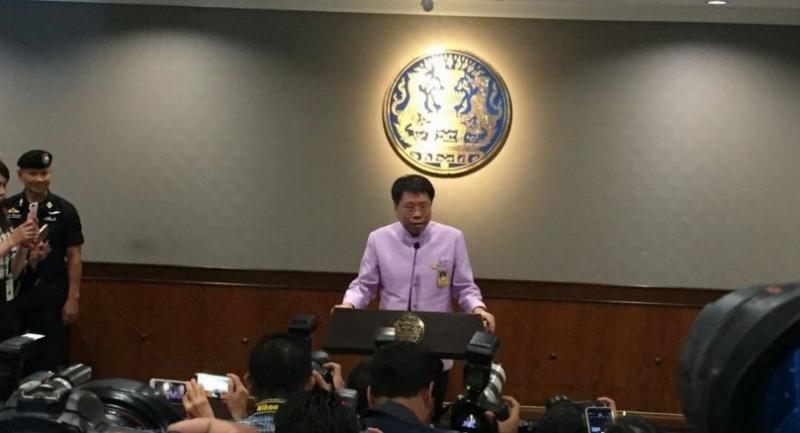 Education Minister Teerakiat Jareonsettasin said on Tuesday he would remain in the Cabinet despite his recent remarks apparently attacking Deputy Prime Minister and Defence Minister General Prawit Wongsuwan regarding his high-profile watch scandal.

“You just cannot tender your resignation whenever something comes up. I’m responsible for continuing to work,” he said during a press conference at Government House.

On Monday, BBC Thai published an interview with Teerakiat while he was in London in which he said that if he were exposed to be in possession of a luxury watch, he would step down from his post.

In recent months, Prawit has been beset by a scandal after being shown to be in possession of multiple luxury watches.

The remarks came as a shock to Prime Minister Prayut Chan-o-cha’s Cabinet, but members of the public have expressed support for the education minister, raising questions about Prayut’s decision on the matter.

Teerakiat said that he had apologised to Prawit for his lack of etiquette shown in his criticism.

The remarks, quoted in BBC Thai on Monday, came during Teerakiat’s speech to Thai businessmen and students at the Thai Embassy in London last Friday, in which he compared the rule of law and ethical awareness between Thailand and the United Kingdom.

He said Thai people were so “thick skinned” that they would never resign from a position even when they were hit with a scandal, although he did not mention Prawit by name.

He also said he had not been aware that BBC Thai had recorded follow-up questions about the watch scandal.

“I’m still confident in PM Prayut and the government,” he said.

Prawit previously explained to the National Anti-Corruption Commission that he had been in possession of the watches because he had borrowed them from friends, adding that he had already returned them.