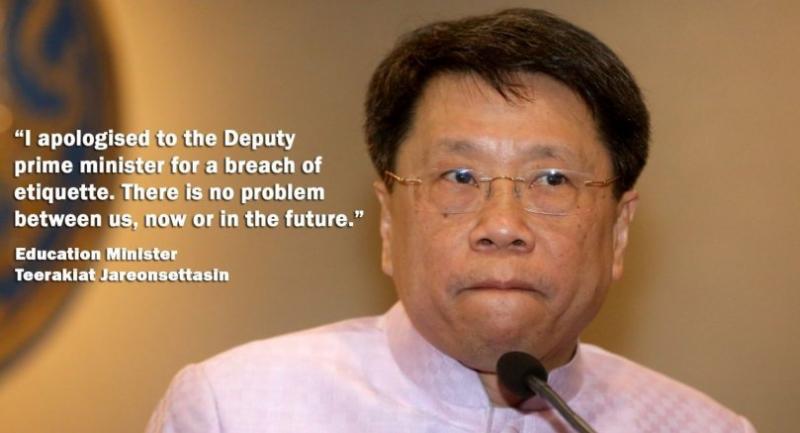 Education Minister apologises after being summoned by Prayut over comments.

EDUCATION MINISTER Teerakiat Jareonsettasin offered an apology to a key junta figure yesterday for criticising the latter’s collection of luxury watches, after a short-lived period during which he appeared to be bravely speaking openly about issues confronting the government.

Teerakiat also said he would not resign from his post and would continue working with the junta government, which also includes Deputy Premier and Defence Minister General Prawit Wongsuwan.

“I apologised to the deputy prime minister for a breach of etiquette. There is no problem between us, at present or in the future,” he said during a press briefing at Government House.

“I still maintain 100-per-cent trust in the prime minister and this government,” Teerakiat added. “I have to choose the best way to maintain the government’s stability. You just cannot tender your resignation whenever something comes up.

“I’m responsible for continuing to work.”

It was also a “lesson learned” for him when giving official interviews, he added.

However, the minister had considered resigning over the controversy, according to a source from the Education Ministry.

Teerakiat’s press conference was called after BBC Thai published an interview and audio recording on Monday, in which he apparently criticised Thai society in general and Prawit in particular.

While attending a reception at the Thai Embassy in London last Friday, the minister said that if he were shown to be inappropriately in |possession of even a single luxury watch, he would step down from his post.

Although Teerakiat did not mention a name, it was perceived as a direct attack against Prawit, who has been under pressure after being seen wearing at least 25 expensive watches. As a result, the deputy prime minister has been under fire not only for his unusual wealth but also for allegedly concealing his assets.

Prawit did not declare any watches or assets worth more than Bt200,000 when he first joined the government in 2014, but has subsequently told the National Anti-Corruption Commission that he had borrowed the watches from wealthy friends and already returned them.

Teerakiat’s remarks came as a shock to the Cabinet, but members of the public generally expressed support for the education minister.

Earlier yesterday, Teerakiat stood firm on his comment but reiterated that the matter “should not create further conflicts”.

He also admitted that the voice in the recording belonged to him, but said that it had been recorded without his knowledge. Contrary to BBC Thai’s account, Teerakiat said he had raised the point during a one-on-one conversation with a BBC Thai reporter, and not in his speech in front of reception guests.

However, he said he did not plan to take further action against BBC Thai.

Teerakiat returned from the United Kingdom on Monday and skipped yesterday’s weekly Cabinet meeting, saying he was jet-lagged after his long flight.

After arriving at his office in the morning, the education minister refused to speak with the media, while a person who identified himself as Teerakiat’s secretary said in a phone call that the minister “is not comfortable to speak on the matter and will not talk about it again”.

Teerakiat kept himself shut in his office for the morning before heading to Government House for a private meeting with Prawit and Prime Minister General Prayut Chan-o-cha.

The afternoon meeting, which Prayut jokingly said lasted “five minutes and 15 seconds”, was described by Teerakiat as “the PM being really nice, asking what happened. The deputy PM nodded with acceptance though he didn’t say anything. I feel more relieved”.

Prayut said his Cabinet was still united while encouraging and forgiving each other. “We have to settle all conflicts,” he said.

Other Cabinet members yesterday declined to comment on the matter. Some simply walked away when asked by reporters for their opinions.