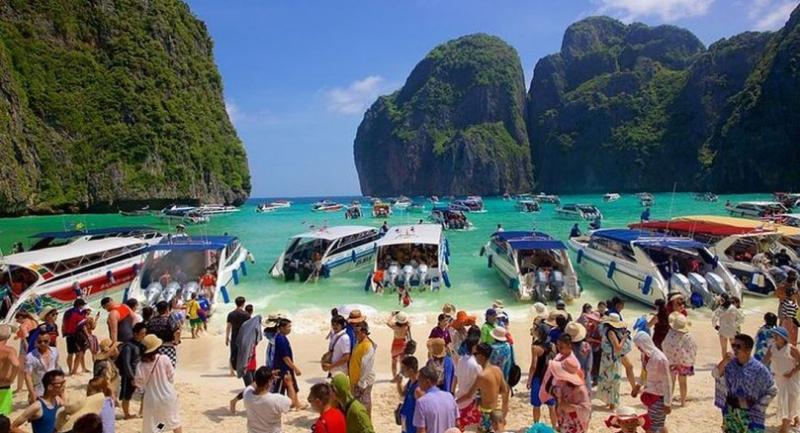 A PROPOSAL to close Maya Bay on Koh Phi Phi Ley to boats to limit damage to the beach was just an idea that was still being considered, the head of Krabi’s tourism office said yesterday.

Apichai Aranyig, director of the Krabi office of the Tourism Authority of Thailand (TAT), denied reports in international media that said the once-pristine Thai bay, which became a tourist magnet after the 2000 movie “The Beach”, would be closed to boats for several months this year to prevent further damage to coral.

Hordes of tourists flock daily to Maya Bay on Koh Phi Phi Ley to take selfies and relax in front of the famed limestone cliffs and blue waters, leading to complaints of environmental damage.

Apichai said there were several proposals to protect the beach being discussed by an advisory committee of Hat Noppharat Thara Beach and Phi Phi Islands National Park. The measures include closing the beach to boats, allowing boats to drop tourists off at the beach and pick them up later, and requiring boats to moor at a designated area, from which a trail would be constructed to the beach.

“We won’t close the island or the beach. We just try to find a solution to allow the beach to regain its natural beauty,” he told The Nation.

“Currently, boats occupy 70 per cent of the beach area, leaving only a small area for recreation. So it is necessary to prevent the ruin of the tourism area,” said Apichai, who declined to disclose the number of tourists and boats that visited the beach each day.

The committee had not yet made a decision, he said.

His response came after AFP reported on Wednesday that Worapoj Lomlim, an official with the Phi Phi islands National Parks, had told the agency that the picture-postcard beach would be closed to boats from June to September this year.

“For around 20 years the bay has welcomed boats to moor in front of the beach ... but their engines have damaged coral reefs and caused problems with the sand,” said Worapoj.

“Overcrowded tourist boats have also blocked the view,” he added, saying tourists would still be able to reach the beach by foot from an adjacent bay where boats could park.

Apichai will today meet Worapoj, who is responsible for the measures, to discuss the matter.

The plan is the latest effort to mitigate damage caused by tourism, a major revenue-earner for the Thai economy with more than 35 million visitors coming to the country last year.

Smoking has been banned on 20 of the country’s most famous beaches since the start of high season, with hefty fines or even jail for smokers who violate the law.