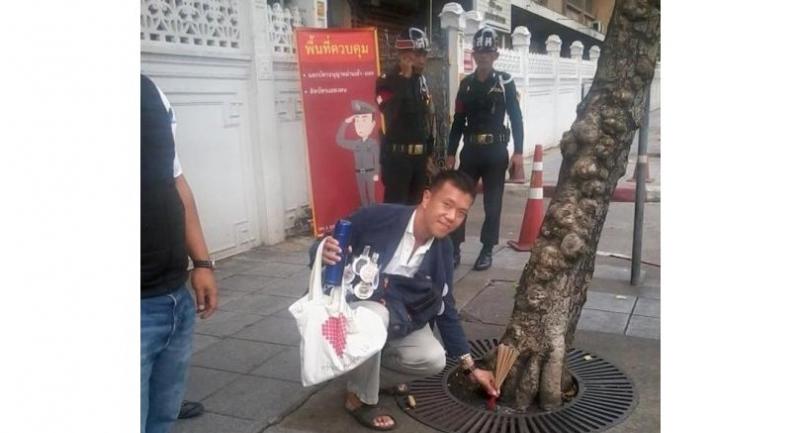 Activist Ekachai Hongkangwan on Tuesday made another attempt to voice his concerns to Deputy Prime Minister and Defence Minister General Prawit Wongsuwan over the latter’s collection of luxury watches.

With his colleague Chokchai Paiboonratchata, Ekachai planted 36 incense sticks in front of the Government House gate on Phitsanulok road.

“I do this to shoo away bad things,” Ekachai said about the ritual.

Apparently, his aim was to mock to mysterious appearance of 36 incense sticks in front of the premier’s office on February 17.

The Prime Minister’s Secretariat Office later ordered a search for the people behind the earlier incident as they worried that it could be “bad omen” for the government.

On Tuesday, the activists also showed up with a vinyl banner depicting Prawit’s expensive watches. “We’ll keep bringing it to be presented to Prawit any day he comes to Government House until he comes to receive it himself,” Ekachai said.

Since the watch scandal was revealed in December, Ekachai has made several attempts to approach Prawit to present his own, relatively affordable watch to the retired general as a symbolic protest over Prawit’s unusual wealth.

“Any watch can tell the time, it doesn’t have to be an expensive one,” he had said. “And the junta’s time to rule should be up already.”

On Tuesday, the two activists also filed a petition, via the People’s Service Centre, to Prime Minister General Prayut Chan-o-cha to ask him to sack Pol General Asawin Kwanmuang, whom they blame for failing to deal efficiently with the smog problem in Bangkok.

“A more efficient person should be appointed in place of him. However, I may propose that the best solution is to hold an election for Bangkok governor as soon as possible,” he added.