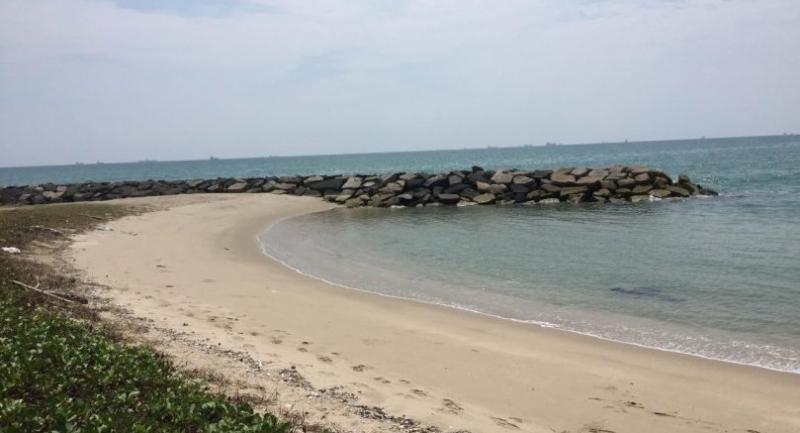 The breakwaters at Rayong's Saeng Chan Beach have transformed once long sandy beach to series of small bays. // Pratch Rujivanarom

EXPERTS SAY coastal erosion in Thailand is getting worse, not better, as had been earlier announced by the Department of Marine and Coastal Resources.

Chulalongkorn University’s Department of Geology lecturer Thanawat Jarupongsakul said yesterday at a press conference that coastal erosion in Thailand had not improved, despite a previous statement by the coastal resources department.

Thanawat said about 830 kilometres, or 30 per cent, of all coastlines in Thailand were at critical levels for erosion at a rate of more than five metres per year. This is far worse than stated in information from the coastal resources department, which recently said only 145 kilometres out of a total 3,000 kilometres of shoreline were regarded as critical areas for erosion. The breakwaters at Rayong's Saeng Chan Beach have transformed once long sandy beach to series of small bays. // Pratch Rujivanarom

“There are many areas where the authorities think that the problem has been solved, as hard structures have been built to stop coastal erosion. But from an academic point of view, these structures do not solve the problem, but instead cause erosion at nearby unprotected areas,” he said.

“Moreover, these structures cannot withstand the force of nature in the long run and eventually waves will destabilise the structures’ foundation and collapse. The hard structures like seawalls … are intensifying the problem, not solving it.”

He said the problem showed authorities still lacked an understanding of marine geology. The construction of concrete structures has already taken its toll, as Thailand has lost up to 79,725 rai (12,656 hectares) of land and 227,937 rai of sandy beaches, mudflats and sand dunes due to serious coastal erosion problems.

Thanawat urged the government to include erosion issues as part of the national agenda to solve the problem both in the long and short term.

Rear Admiral Pravit Phipit-kosonwong, head of a working group to solve coastal erosion on the National Reform Council, said the greatest problem in solving coastal erosion was each relevant agency – such as the Department of Marine and Coastal Resources, Marine Department and the Public Works and Town and Country Planning Department – all had their own responsibilities.

“I suggest that there should be a law to specifically overrule the integrative corroboration between different agencies in order to let all of the players truly work together on the same policy,” Pravit said.

“We have to stop this problematic construction to prevent the problem spreading,” he said.